Last night, I had the opportunity to see Barack Obama’s campaign rally here in South Bend. Tickets were gone within ten minutes on Tuesday, but because of my longstanding relationships with the local media, I was able to get credentials in return for some live post-event analysis.

As I sit here and begin to form my thoughts, I am reminded of the pitfalls and cautions of the participant-observer method of social science. Political scientist and congressional scholar Dick Fenno spent the bulk of his professional career following politicians around at home and in Washington to better understand their perceptions of representation. In a particularly interesting methodological piece (Watching Politicians: Essays on Participant Observation), Fenno has written how difficult it can be to put your own emotions aside and not become invested in the success of those you spend considerable time observing. Fenno notes that he came to like the senators and congressmen he travelled with, and found himself wanting them to win and to succeed regardless of their particular politics. To do good political analysis, it is important to remember to keep your own emotions and passions in check and not get caught up in the “moment”.

And yet, a political rally is perhaps the hardest place to keep those passions at bay. The very activity is designed to pull you up, to get you excited, to stomp your feet, to clap your hands, to say “Yes, We Can” with the crowd. I saw members of the media wearing Obama stickers and clapping with the crowd. I did my best to remain detached and stick to my main purpose for being there: to understand the sensation that is Barack Obama and why he might come out of the political wilderness and capture the presidential nomination.

In terms of Obama’s speech, I did not hear much that I hadn’t heard or read elsewhere. The speech was his standard spiel, and not particularly tailored to Indiana. Contrast this with Hillary’s speech, which had a laser-like focus on the economy and certainly was meant to stir the union folk in the crowd to action.

No, the speech itself did not tell me much about Obama. Rather, it was his unscripted moments that spoke volumes about the man. Unlike Hillary, Barack did not take questions. The questions allowed Hillary to showcase one of her strengths: the ability to talk policy. What struck me about Barack was his poise and confidence. But do not confuse confidence with arrogance. I’ve read elsewhere that Barack thinks he’s all that and a bag of chips. It will shock no one that politicians have egos; a healthy dose of ego is required put oneself through the gut-wrenching and exhausting daily slog that is a campaign.

Arrogance is not what I sensed. Instead, I sensed that this man knew who he was and was sure of his leadership abilities. And he was human. Barack was funny, engaging, and witty. At one moment, he said that he’s shaken tens of thousands of hands, and kissed hundreds of babies. Then he stopped for a moment and pointed to a baby in the crowd in front of him, saying, “And I’m going to kiss that baby, too. He’s a cutie”. The crowd roared its appreciation, and he chuckled. When he wrapped up his speech, the crowd began to shout, “NO, NO”. Barack just smiled and said, “C’mon guys, it’s late. We need to get some sleep so we can get to work.” Barack was, quite simply, engaging. He passes, I think, the beer buddy factor. I wanted belly up to the bar with him and quaff a brew or two with him.

The difference, though, is I felt I could talk about anything with him at that bar. Sports, religion, politics, faith, problems at the office—you name it. Barack seemed to me more like the close friend you confide in and share your problems with than the buddy you talk sports with while watching the game. Perhaps this explains some of his attraction: his ability, in a short period of time, to develop an attachment with people. Bill Clinton has this—some call it “EQ” or emotional intelligence. Presidential scholar Fred Greenstein has pointed out that EQ is something that is in short supply, but something that is particularly useful for successful leadership. A lack of EQ, on the other hand, can be devastating (witness Nixon). 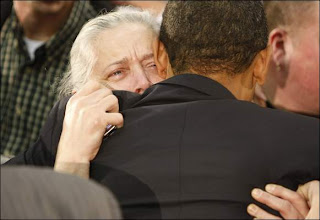 For those looking for policy details, there were none. But the crowd didn’t seem to care. 3,500 folks turned out in the middle of the week and waited until 10:45 to see Barack. Some probably didn’t get home until after midnight. Yet no one left. The crowd was electric and the cheers for Barack upon his entrance deafening. This crowd didn’t need the details: it had largely made up its mind already. They wanted Barack, and they wanted him now. If the energy in that room translates into volunteering and voting, Barack may very well win Indiana—a state demographically more to Hillary’s favor.

This morning, as I conclude my thoughts on last night’s rally, I think back to Fenno: Did I keep my emotions in check? Could I stop myself from rooting for Barack? And the answer is no. But I rooted for Hillary after her rally, and suspect I would do the same after seeing John McCain. The simple fact of the matter, I am biased, but not in the normal way one might expect. Sure, I have particular policy beliefs and an ideological slant. But as I spend more time observing the political process, I’ve learned that I have another bias, too. I like politicians and I want to see them succeed. It’s too bad that they all can’t win. 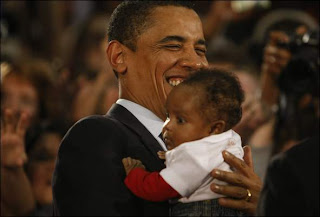 As one who also saw Obama at Washington High School, I'll begin with a disclaimer. Though I am fond of John McCain in many respects, I am ultimately an Obama supporter, and at no point during the rally did I seek to check my emotions or limit their influence on my experience. Naturally, there are downsides to this approach, but against the notion that emotions hinder judgment, one can argue that judgment matters little if we constantly suppress our emotions in order to retain its purity, and thus deny ourselves all of the pleasurable experiences therein. Moreover, it is possible for one to openly embrace the moment and yet still revisit the experience later with a reasonable degree of objectivity.
In regard to Dick Fenno's findings, I believe the phenomenon he speaks of to indeed exist, but am not convinced that this issue alone adequately explains the inspirational power of Obama, which you and I felt at the rally. I share your sentiment of wanting multiple politicians to win. As I feel relatively familiar with, and attached to, our political process, I feel as though I can somehow personally relate to these politicians and their situations in ways that others cannot, as exaggerated and potentially arrogant as this feeling may be. On the other hand, there are a number of politicians who I outright detest, and many who, merely at their being elected, would likely cause damage to my view and trust of the American people, as voters. Yet in regard to Obama, though I do disagree with some of his policies, I feel excited and hopeful that he will win, not merely because of his EQ, his brilliant oration skills, or the energetic momentum at his rallies, but because of what his candidacy represents.
Even my family members, who are steadfast Republicans that oppose almost all of his policies, admit that they would not be terribly upset if he won the general election in November, and would even, in some ways, be proud at his success. Amusingly, they're excited to vote for him in the Indiana primary so they will be able to say, "I voted for Obama before I voted against him." Meaning, even those who don't attend Obama's rallies or agree with his ideology, can be, and are, excited that the first American of color, who comes from very humble conditions no less, might be elected leader of the free world. Much of Obama's inspirational power stems from the fact that his story personifies the American dream from an angle it never has before; i.e. we’re finally seeing a legitimate presidential candidate with a minority “rags to riches” story. There is also hope and anticipation that much healing will occur, in terms of the racial divide between Caucasians and African-Americans in this country, at his very election into office, and I felt this sentiment strongly at Washington High School. While waiting in line for four hours, surrounded by, and conversing with, Caucasian and African-American families, a sense of unity and mutual aspiration (in this case, primarily support for Obama) really filled me with the hope that his election as President of the United States will serve as a symbol that America is still heading in the right direction, and help to ease some of the lingering tensions so many Americans feel. Teenagers and schoolchildren across America, of any race, that now live in single-parent homes or in financial distress, might no longer see only wealthy, white men dominating the most powerful position on the planet. If asked whether or not they could grow up to be president, they could look to Obama and say, with a much greater confidence than they could before his presidency, "Yes, we can."
This is why, I believe, it is so easy to root for Obama, regardless of political affiliation or ideological allegiance, even if one doesn’t vote for him or supports him only internally. Attending positive and energetic political rallies or closely following candidates’ campaigns certainly may cause one to increasingly favor the candidates, but in regard to Obama, the urge to support him does not solely, nor necessarily, spring from an admiration of his policies or his politics, but rather from a shared belief in the American dream.