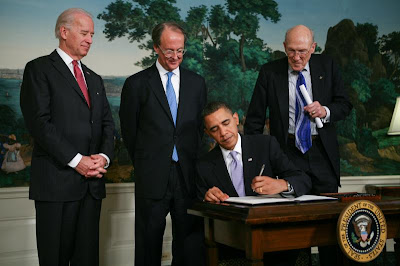 British political scientist Anthony King wrote an interesting book called Running Scared. In it, he discusses how elected public officials are unwilling to deal with toxic political issues, like entitlement reform, deficit reduction, or the closing of military bases. The problem, of course, is politicians are risk-averse--especially when they are faced with paying the political costs of making an unpopular decision. Military bases that are no longer needed or antiquated may need to be closed, but individual members will fight to protect those bases because the cost of closure is directly borne by them AND their constituents. And, given that any member might have a military base closed on them, members of Congress collectively will fight to keep any base from closing--thereby perpetuating an inefficient use of military funds and resources.
King, as well as others (Canon and Mayer 1999; Epstein and O'Halloran 1999), note that in these situations Congress will seek to delegate the responsibility to address such nettlesome political issues to a commission. These commissions will have the power to make the tough decisions, and Congress develops processes to protect those decisions as they work their way through legislative process. Case in point is BRAC: the Base Realignment and Closure Commission. This commission was tasked with the responsibility to close America's excess military base capacity using a set of economic, strategic, and mission-centered variables that removed politics from the equation. The Commission would then make its recommendations to the President who would forward the entire list to Congress who had to vote the entire list up or down. The process worked quite well: military bases that were no longer needed were closed, and members of Congress could fight the "good fight" on the House/Senate floor against the recommendations, but in the end, any one individual member could not easily hold the process hostage. The process was so successful that it was used repeatedly: in 1991, 1993, 1995, and in 2005 (a slightly different process was employed in 1988).
Unfortunately, President Obama's Debt Commission's recommendations are dead on arrival because Congress never bought into the process and created a commission that was insulated from political pressures like BRAC. The National Commission on Fiscal Responsibility and Reform was established by executive order after legislation to create it was defeated. Any recommendation established by the Commission, if it is forwarded to Congress at all, will not be protected from amendment by members who face electoral pressures. Republicans will be loathe to go on the record and support tax increases (can you say Tea Party primary opponent?). Democrats will be similarly reluctant to support changes in Social Security for fear of upsetting their liberal base. In short, the electoral forces to which members respond will undermine any genuine, bipartisan effort to deal with the debt crisis. If Congress and the President are truly serious about dealing with the national debt, they will develop a Commission based on the BRAC model that will have the authority and protection necessary to develop a comprehensive solution that will include the tough tax hikes and entitlement cuts necessary to create the basis for long-term fiscal sanity. Anything less is merely posturing that will be subject to the fundamental problem of the collective action dilemma.
Posted by David Parker at 1:44 PM