Have Members of Congress become...Ferengi? 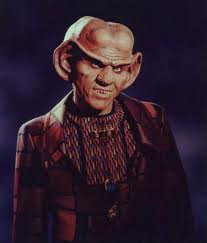 
One of the many misperceptions about members of Congress is that congressional recesses are playtime for politicians. Nothing could be further from the truth—particularly the August recess. Members spend much of August travelling their districts and states getting feedback from constituents. Officially, the recess is known as a district or state work period. Members hold office hours, work on constituent problems, and often hold town hall meetings with the public to get their thoughts and feedback. This is an essential part of the representational connection, and is essential to legitimacy in a republic. Both Senator Tester and Congressman Rehberg have been travelling Montana in August to connect with their constituents. And both come back to the state often even when Congress is in session to stay in touch with the folks back home.

Imagine my surprise when I read this article in the Politico, which notes that some members of the House are not holding any public town hall meetings with constituents during the August work period. Even more shocking is the fact that these same members are participating in events where the public can attend and ask questions in a face to face format FOR A FEE. Other outlets have picked up on this (see related stories here, here, and here, and here, and at least one member--after public outcry--agreed to hold an open town hall meeting with his constituents (see here).

Yes, that’s right. You can have access to your member if you are willing to cough up some dough.

One of my favorite television shows is Star Trek—in particular, Deep Space 9. One of the main characters in that show, Quark, belongs to a race of uber-capitalists called the Ferengi. The Ferengi developed a culture that makes Ron Paul’s version of the free market look overly regulated. Everything--and I mean everything—has a price for the Ferengi. You want a government regulator to look the other way? Pay a bribe. If you want to visit a friend in their home, you are expected to pay a fee. The Ferengi society is governed by a series of dictates collectively known as the Rules of Acquistion that help guide individual Ferengi to great profit. There are 286 rules. Here are a few:

Rule 1. Once you have their money--never give it back.
Rule 21. Never place friendship above profit.
Rule 98. Every man has his price.
Rule 285. No good deed goes unpunished.
(Source: The DS9 Encyclopedia,

So, if you want to see your Member of Congress, pay first--up front. In a world where even basic customer service requires a fee, it is sad to see our democratic process become so debased and disconnected from reality. This is certainly not something the Founders ever intended. It would seem that some members of Congress are more interested in learning the Rules of Acquisition than attending to their solemn responsibilities as representatives to meet and learn from the voters who put them in office.

But what is even worse, in my view, is the cognitive dissonance members avoid when walling themselves off from their constituents. Individuals prefer to avoid conflict and opposing viewpoints because it upsets their own personal worldview. The last thing we need is to have members become deaf to the voices of dissent among the folks back home. To use the words of E.E. Schattschneider, the scope of conflict needs to be broadened in politics, not narrowed. Otherwise, policy decisions and outcomes will be made by a select few and not necessarily in the best interest of the whole and of the constituency.