Does House Service Make it Harder to Move to the Senate? Remember Fenno's Paradox!

The New York Times recently published a piece on the difficulties House members face when running for the Senate. Read it here. The article discusses Congressman Rehberg, and the chief point it makes is given that Americans hate Congress, so why would they select a House member to move to the Senate? The author notes that the dismal rankings Congress receives overall will make it much harder for individual House members to make the move up to the Senate.

As a political scientist, I had three problems with the article.

First, the serving in the House is the single best path to the United States Senate. Looking at the current membership 112th Congress, 46 senators served as a House member as their last job prior to moving to the Senate. No other career path comes close. 13 served in some statewide elected office other than Governor, and another 10 served as their state’s Governor. 10 had no elected office experience at all, 9 served in the state legislature, and 12 had some elected office at the local level. The New York Times underestimates the skills House members obtain and hone during their service which make them strong Senate candidates.

Second, the article presumes that because Americans hate Congress, they hate their own member of Congress. Anyone who has taken my introduction to American politics class should be familiar with the concept of Fenno’s Paradox. Fenno notes that many Americans hate the institution of Congress, but like their member of Congress. The following graph—which I used in a lecture just last week—illustrates the point clearly. Here in Montana, both Senator Tester and Congressman Rehberg have job approval ratings well to the north of the Congress.

Fenno's Paradox: Ratings of Congress and Incumbents in the American National Election Studies, 1990-2008. 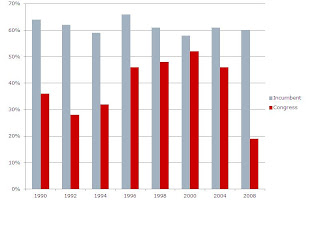 Finally, serving in a state as the lone House member is very different from serving in the House from a state with multiple House members. Generally speaking, the key difficulty facing a House member moving from a congressional district to a statewide office is moving from a more politically homogenous political entity to one that is more heterogenous, representing a more diverse constituency. The same rules do not apply, obviously, to House members representing an entire state. Sure, the House is a more partisan political institution and the name of the representative game is slightly different in how Washington Work is approached. But the task of representing a state—in a single-member House delegation—is not entirely dissimilar from serving in the U.S. Senate (but see Richard Fenno's book, When Incumbency Fails, on North Dakota Senator Mark Andrews who, after having served many years in the House, was elected to the Senate in 1980 and lost reelection in 1986).

This is not to say that Congressman Rehberg or Congressman Berg in North Dakota don't have a tough path ahead of them. But that path is not necessarily more difficult because of their service in the House. The conventional political science wisdom would suggest otherwise.

While I generally agree with the outcome of your analysis, there is a segment that I question. In support for your conclusion that "serving in the House is the single best path to the United States Senate[,]" you put forth the statistics of the origin for each member of the current Senate. I fear that you may too strongly be relying merely on the end result and missing some of the greater picture. That is to say, this analysis does not take into consideration the possibility, and perhaps the highly probable possibility, that those having served in the House seek election to the Senate at an incredibly higher rate than persons with any other background. If this is the case then certainly a very large percentage of the Senate would be comprised by former Congressmen, yet the failure rate for a representative turned Senatorial campaigner might be significantly higher than any other background. I would assume, based on failure rate, that Governor would be the single best path.

Excellent point! I was going to conduct said analysis but didn't have the information immediately at my fingertips. When I do, I will post that information.