How Vulnerable is Max Baucus...Really?


Montana Republicans are pretty excited about what they perceive to be Max Baucus’ vulnerability leading into the 2014 cycle. There are two indicators which are suggestive of said vulnerability. First, Max Baucus’ job approval ratings may be underwater. Two recent PPP polls had Baucus’ approval ratings at 41 (November) and 45 (February), respectively. By comparison, Senator Jon Tester—who was widely considered vulnerable in 2012—had a job approval rating of 50 percent two years before Election Day in PPP’s poll. Baucus’ numbers are less than Tester’s in the same PPP poll, and generally speaking, an incumbent who is under fifty percent could be in trouble.

Second, some national observers are suggesting that Max Baucus could be in trouble—and the most notable national observer is Nate Silver. Silver, of course, correctly predicted all but two Senate races in the 2012 cycle correctly using his econometric modelling techniques. Silver recently placed the Baucus race in the toss-up category, noting that Montana is a conservative leaning state and that Senator Baucus’ role in shepherding the Affordable Care Act (ACA) through the Senate Finance Committee hasn’t played well in the state. Of course, Silver was wrong on Montana—Tester won the race and did so largely in spite of voting for the ACA. Nevertheless, at 71 years old, Baucus may have a fight on his hands. All of this is known, and I’ve commented on it on the past here on this site.
How vulnerable is Max Baucus really? Well, to be frank, the evidence is mixed. First, Senator Baucus has raised a boatload of money. It will be very hard for a Republican challenger to match the kind of funds that Baucus has at his disposal. As of the last quarter FEC filing, Baucus had $3.5 million cash on hand—more cash on hand than any other Democratic Senator running for reelection save one. Frankly, creating a sizeable war chest is one of the key powers of an incumbent as it tends to scare-off quality and strategic challengers because of the daunting prospect one would face to raise the money to compete. Consider, too, the important perch from which Baucus goes into this race: he’s the Chairman of the uber-powerful Senate Finance Committee. I heard several stories from sources that Senator Baucus used his position to help Senator Tester raise money and to “suggest” to some lobbyists that it would be “unwise” to give money to Tester’s challenger, Congressman Rehberg. If you were a lobbyist, would you really want to risk your access by giving to Champ Edmunds (who just announced his bid) or Corey Stapleton?

Senator Baucus hasn’t had a serious electoral challenge since Congressman Rehberg—then the Lieutenant Governor of Montana—ran against him in 1996 and came within five points of beating him. After that, he’s coasted to reelection. In 2008, against an admittedly weak and less than serious challenger (Bob Kelleher, who wanted to move the United States to a parliamentary system), Baucus racked up 73 percent of the vote. The lack of a serious challenger can cut two ways. The lack of a strong challenger is a sign of strength because the Senator scared off all the serious ones. The lack of a strong challenger could auger some weakness because the Senator hasn’t faced a real competitive race in nearly twenty years (certainly, Montana Democrats made this case about Congressman Rehberg in suggesting that his challenge was not nearly as formidable as some claimed).

Silver dismisses the lack of past serious challengers, saying what is more important in forecasting the Montana Senate election is the recent job approval numbers that tell us how voters feel right now about Senator Baucus. Well, to cite an old campaign adage, you can’t beat somebody with nobody, and at this moment, it is clear that Champ Edmunds is a second tier candidate at best. Whether Corey Stapleton is a somebody or nobody remains to be seen. He has some statewide recognition owing to his recent gubernatorial campaign and he served for some time in the Montana Senate, so he knows about running for and serving in office. His seriousness depends mostly on his ability to raise cash.
Silver’s point about job approval numbers is worth noting. I assembled the job approval numbers of Senators up for reelection in the last four election cycles. I sorted the senators into three categories: senators who ended up opting for retirement, senators who won reelection, and senators who lost (see Figure 1). The patterns are suggestive but not conclusive. Senators who have lower approval numbers, on average, generally opt to retire—and this is particularly true when going into what appears to be a wave election that will likely work against your party. Senators who win reelection are generally more popular on average, and Senators who lose generally have lower approval numbers two years out. 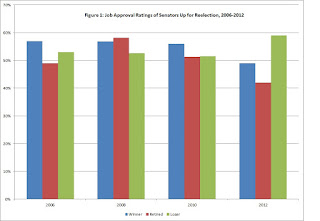 2012 was odd, however. Senators losing reelection actually had HIGHER job approval numbers two or so years out than those who won reelection. First, 2012 was a year where relatively few Senate incumbents lost reelection (91 percent of those seeking reelection won): Scott Brown lost after having won a surprise special election to replace Senator Ted Kennedy in Massachusetts, and Dick Lugar lost in the primary to a Tea Party endorsed Republican. Both had rather high approval ratings two months out.

Looking at previous vote percentages (see Figure 2), the pattern is the same. Generally, senators reelected with lower numbers are more likely to lose than those who win reelection six years later. Retirees can either go out strong (as they did in 2008) or leave strategically because they don’t want to face a tough reelection (like 2006). Again, 2012 defies the pattern largely because Dick Lugar won by such a large margin in 2006 (receiving 87 percent of the vote) and so many Democrats won reelection despite having won by relatively slim margins six years previous (likely due to the great GOTV effort undertaken by Democrats and allied interest groups). 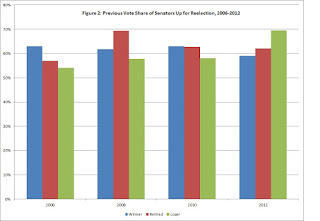 Midterm elections like 2014 have consistently led to the president’s party getting spanked at the polls (for data, see the Presidency Project here). Generally speaking, Senator Baucus exhibits some signs of vulnerability, yes. But that’s a long way of saying he is going to lose. At the end of the day, incumbents are damn hard to beat. House incumbents have a reelection rate of 95% in the post-war era, and even in wave elections like 2010 or 2006 have reelection rates above 90 percent. Winning reelection to the Senate is harder, but even then incumbents choosing to run for reelection win 85 percent of the time. There’s no scandal, which kills incumbents (see Conrad Burns, Herman Talmadge for illustrative cases). Baucus is in good health (unlike Senator Roth, who lost in 2000). It appears that the Democratic ranks are closing around Montana’s Senior Senator (see media accounts of the Mansfield-Metcalf dinner). If you were to wager on Max Baucus’ reelection prospects today, you would be well-advised not to bet against him.
Posted by David Parker at 10:13 PM