2016: Is there a Republican NOT running for President? Bueller? Bueller?

What's more than the number of NFL players at team can have on the field?

The number of Republican candidates who have formerly announced their campaign for the presidency in 2016.

That's 16 Republican candidates to 11 NFL players. And, when you count the number of announced Democratic candidates (5), you almost have a complete offensive and defensive line!

Turns out, I was right.

OK, first the caveats. I define the modern presidential era with the 1972 campaign because that's the year that the McGovern-Fraser reforms, adopted by the Democratic Party, transformed the presidential nomination process. Essentially, the reforms opened up the selection process to voters in primaries and caucuses and while the reforms were established by the Democratic primary, the consequences of the reforms quickly spread to the Republican Party.

Second, it is hard to develop a hard and fast rule first for determining whether a candidate is seriously contesting the nomination.  I took the lead of political scientist Matthew Dickinson who recently opted for the standard used by Bill Mayer and Alan Silverleib: Did the candidate file a statement of candidacy with the FEC and who formally announced. For 1972 through 2008, I pulled from the list complied by Mayer and Silverlieb themselves in their chapter of the edited volume The Making of Presidential Candidates 2012. I then calculated the totals myself for 2012 and 2016, counting only the candidates that seriously contested the primaries or who had held previous elected office (so, Governor Tim Pawlenty and Congresswoman Michele Bachmann count, even though they were out before the first electoral contest, but so does Herman Cain of 9-9-9 fame).

Because I love charts, here's a chart. Click on it to enlarge. 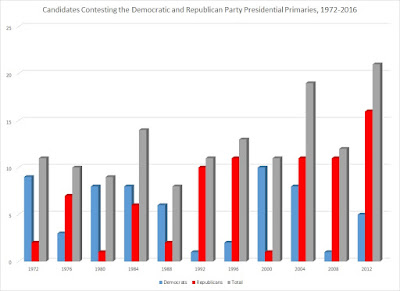 What we get is 16 candidates in 2016--five more than the 11 Republicans running in 2008, 2012, and--yes--2000 (many people seem to think it was on McCain versus Bush, but there were many others who simply exited very early). With five Democrats announced today, that's 21 candidates total running for the Democratic and Republican nods. That's two more than in 2008, which saw 19 candidates total.

And, look at the resumes of just the Republican candidates. We have:

Dickinson's article, linked above, explains why so many Republicans are running for the job, noting that there is no incumbent candidate, it is unusual for the sitting party to hold the White House for more than two consecutive terms, and some candidates may be running for reasons other than winning. I agree with the points he makes. What I'm interested in knowing is how Republican primary voters--and, to a lesser degree, Democratic primary voters, will be able to make clear choices in such a crowded field. As other political scientists have noted, including Washington State University professor Travis Ridout and Vanderbilt professor Larry Bartels, is election outcomes can quickly narrow the field both for the media and voters in subsequent primary contests.

That is, the media will concentrate its attention on the top three or four vote getters in the Iowa caucus and Republican primary and hence, voters will learn more about those candidates than the others. The major difference now, however, is the presence of Super PACs--which considerably changes the information game for voters. Between wealthy backers of candidates and state Republican Parties adopting proportionate delegate selection rules for early contests, the Republican primary process should be considerably lengthened. That, of course, is historically unusual given that the Republican Party historically has favored winner take all contests that allow an early frontrunner to quickly garner enough delegates to become the party's nominee early.

In 2008, McCain had the Republican nomination wrapped up by mid-March while the Democratic contest continued through early June. Democrats will likely think this is to their advantage, as a long, drawn out primary will bloody the eventual Republican nominee who will then go down to defeat to Hillary Clinton in November.

Of course, that's not how events played out in 2008, now is it? Competition tends to bring out the best in candidates and, more often than not, make the eventual nominee stronger. Perhaps the competition among Republicans and a longer contest may work to their benefit in 2016 as well.