Congressman Ryan Zinke: Too Liberal to be Speaker?

Montana's lone Congressman, Ryan Zinke, has recently been floated as a possible candidate for House Speaker. Apparently, the Congressman is taking the possibility of a campaign for the Speakership seriously and may throw his hat in the ring.

Zinke's leadership as Navy Seal propelled him to victory in 2014, and he--and others--think his leadership skills are exactly what are needed to right the Republican House Caucus.

I think this idea is crazy for lots of reasons, and I've gone on the record as to why I don't think it's a good idea or feasible (here and here). But to be clear: Zinke's leadership skills are not the problem.

One item I did not mention in my interviews is the Congressman's ideology relative to this peers in the House Republican caucus because I had not reviewed the data. Now that I have, I can say with some confidence, that the Congressman's ideology would present a serious problem in any Speakership bid. And, contrary to a recent press release from the Montana Democratic Party, it's not because Congressman Zinke is a "Tea Party sympathizer." Instead, Congressman Zinke might be too liberal to be Speaker of the House.

On this blog, I have long referenced the DW-NOMINATE scores produced by political scientists Keith Poole and his colleagues over at voteview.com. Using roll call votes cast, Poole and his fellow number crunchers develop a measure of ideology arrayed along a left-right dimension that plots each member of the Senate and House from most liberal to most conservative, roughly constrained at -1 for the most liberal member and +1 for the most conservative. In the past, these data have only been available after a congress has concluded. Now, however, they have developed a measure of ideology which they update weekly once roll call votes have been concluded.

I downloaded these weekly DW-Common Space scores earlier this week (available here), stripped out the Senate, and then calculated the mean ideology score for the House Republicans and then the House Freedom Caucus (using wikipedia's membership list to determine who was in the caucus). I then plotted those values along with the ideology scores of every conceivable speaker candidate from least conservative to most conservative. The results are reported below. Click on the chart for the best view.

Table:  Ideology of House Speaker Candidates in the 114th Congress 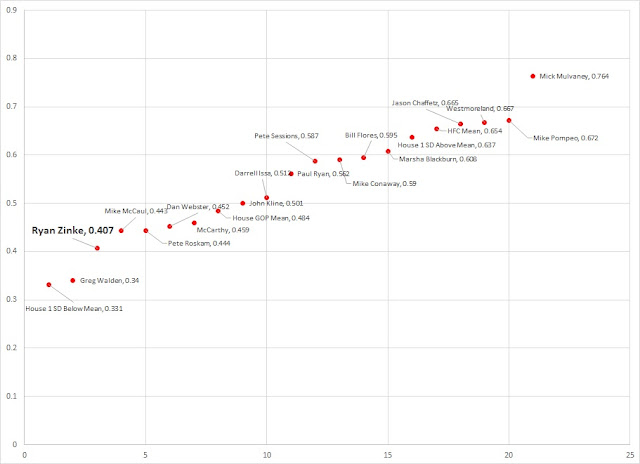 As is plain to the reader, Congressman Zinke is well to the left of the House Freedom Caucus, slight to the left of the average Republican member, and--among all the possible Speaker candidates mentioned--the second most liberal to Congressman Greg Walden, the NRCC chair from Oregon. He is more liberal than Congressman McCarthy, who withdrew from the speakership race. And, he is certainly more liberal than Congressman Ryan, who, according to The New York Times, is possibly too liberal for some members of the very conservative House Freedom Caucus.

Congressman Zinke will not be Speaker of the House. He's simply too liberal for House Republicans.
Posted by David Parker at 9:00 AM

Was Speaker ever the intended goal? I haven't been watching all the morning newscasts or the radio spots, but Zinke is getting his name out there. He's doing so a lot this week.

They've done nothing, yet Zinke has gone out and reinserted himself in the Montana conversation.

Perhaps not. Perhaps the Speakership trial balloon is about getting national press, which can lead to other things, such as fundraising and national profile to do something bigger in the future.

David, First awesome post. I have always felt that Zinke was a moderate, but now I have numbers to back up those feelings. Thanks. Virgil