In political science, there's a well-known phenomenon known as the "Rally Around the Flag Effect". Quite simply, when the nation is under threat, the public turn to and give their support to the president. Two very good examples of this are the Presidents Bush: When Iraq invaded Kuwait and the Twin Towers were attacked on September 11th, Presidents George HW Bush and George W. Bush enjoyed a quick surge in public support in public opinion polls.

It is also the case that other executives experience surges in public support during time of crisis. We've seen Governor Cuomo's numbers surge in New York, and it's surely the case that other governors are suddenly more popular during this unprecedented and difficult global crisis. 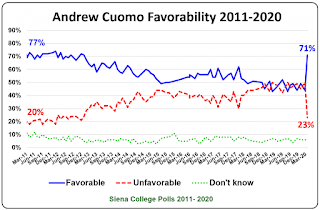 Part of the rally effect is likely in part due to the fact that a crisis moment is a focusing event for the media: it drives other stories off the front pages. In the case of 9-11 and the current COVID-19 pandemic, these stories became the only story covered by the media. Nearly every cable channel turned to 9-11 coverage, sporting events were cancelled, and travel halted. In the case of COVID-19, there is almost nothing else to cover: not only are sporting events cancelled as they were during 9-11, but nearly everything else in society has ground to a halt. The only way to avoid COVID-19 is to read a book or binge shows on Netflix.

How does the singular coverage of a crisis by the media potentially generate a rally effect? Executives are the actors who receive the bulk of the coverage during the crisis. Governors and presidents have emergency powers they can draw upon--often enshrined in constitutions and in statutes--which empower them to respond decisively and quickly to coordinate relief efforts. Legislators obviously respond by passing appropriations and emergency legislation to address the crisis, but it is the responsibilities of executives to put those directives and appropriations to work. As a result--with all eyes focused on the crisis--governors simply get more media attention and that attention is very often positive. The sheer act of moving--of doing--to make people feel safe can generate goodwill from the public. Governors also provide information from the many executive agencies they lead and which are responsible for addressing the crisis. Legislators simply get lost in the shuffle: there are too many and while their response can be just as crucial, it can seem by comparison less dramatic and direct.

How does this matter for the U.S. Senate race here in Montana? It could very well matter a lot. Why? Because in a period where electioneering is challenging at best, Governor Bullock is dominating earned media. And that earned media is overwhelmingly, if not exclusively, positive. Steve Daines, on the other hand, is receiving almost no coverage by comparison.

How do I know? I ran the numbers. Here at Montana State University, I have access to Access World News--a database of news coverage spanning the globe. Very simply, I selected media coverage in Montana from April 2019 through the March 30, 2020, searching for "Bullock" and "Daines" respectively. I also did a similar search for former Governor Brian Schweitzer between April 2011 and March 2012 to provide a baseline comparison to Governor Bullock's coverage. The results are reported in Figure 1, which reports the trend in coverage by the total number of articles mentioning Bullock, Daines, and Schweitzer by month. I simply counted all articles--including editorials and letters to the editors.

Under normal circumstances, one might expect that Governor Bullock to receive minimal coverage after the conclusion of the legislative session when--for all intents and purposes--he's a lame duck. This should also be the case for Schweitzer, who was in a similar position at the end of his second term. If one compares Governor Bullock's coverage to Governor Schweitzer's, that seems to be the pattern for both of them until March. There's a spike in May 2012 and May 2019 for each: Schweitzer responded to a series of terrible floods in the state, while Bullock announced his presidential run. Senator Daines' coverage is a bit lower than Governor Bullock's during this period, but not appreciably so--in fact, he even receives more mentions in January and February of 2020.

And then, the Corona virus hits the US, and Governor Bullock goes from 184 articles mentioning him in February to 809 in March--while Senator Daines stays essentially the same.

A closer look at March in Figure 2 maps this even more precisely. At the beginning of the month, Daines and Bullock had a near-parity in media coverage up to and including the day Bullock declared his intention to contest Daines' Senate seat.  But, as the COVID crisis hit America, Bullock's coverage began to take off while Daines remained steady: 36 stories on March 12, 28 on the day Governor Bullock announced the state's first COVID cases, 51 on March 16, 36 on the day Bullock extended school closures (March 24), and 69 (the series high) when the Governor announced his shelter in place order.

By comparison, Daines' best day was 16 articles on March 17 when the Senate came back into session to discuss the House COVID-19 relief package.

The nature of the global pandemic has upended daily life. It certainly has turned electioneering upside down; how does one campaign when you can't hold rallies, hang out with voters, pop in to TV studios for interviews, or raise money? It may also have changed some of the dynamics in the Montana Senate race, giving Governor Bullock a crucial early advantage in the spring that under normal circumstances he would not have.
Posted by David Parker at 10:22 PM