Is McCain a Conservative?

There is a lot of hand-wringing by conservative Republicans concerning McCain's ideological purity. Conservative friends of mine have steadfastly refused to consider supporting McCain, arguing like Rush Limbaugh and Ann Coulter that McCain is a RINO (Republican in Name Only).

I wondered: could political science shed any light on this matter?

Professors Keith Poole and Howard Rosenthal developed a measure of ideology that is widely used by political scientists. The math is way over my head, but essentially they took all congressional roll calls for each chamber going back to 1789, tossed them into a supercomputer and asked it to uncover any patterns. The results yielded two dimensions which explain much of the variation in roll calls, with Poole and Rosenthal arguing that the first dimension uncovered is ideology along a left-right dimension.

I used the NOMINATE data to plot some graphs of McCain's ideological journey during his service in the Senate.

Chart 1 plots McCain relative to the party mean and the ideological extremes within the party. 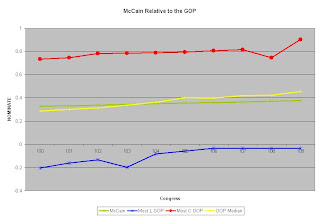 Two things leap out. First, notice that McCain pretty much stays close to the party mean during his entire time in the Senate. He starts out a bit more conservative and becomes a bit more moderate, but essentially he's a moderate WITHIN the party.

To see how far the party has moved toward the right, look at Chart 2. This is McCain's conservative percentile during each Congress. He's 70% more conservative than his fellow GOP Senators in the 100th Congress (sandwiched between Dave Karnes (NE) and Strom Thurmond (SC)--hardly liberals). By the time we get to the 109th Congress, McCain is only in the 33rd percentile (between Thad Cochran (MS) and Kit Bond (MO). 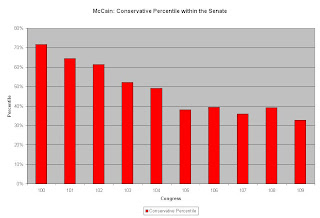 Relative to his party, McCain appears to be a moderate. But there's yet another way to think about this. Is McCain conservative relative to the entire Senate chamber throughout his career?

I took the absolute distance between the most conservative and most liberal Senator in each Congress. I then calculated equi-distant cutpoints representing the categories of very conservative, conservative, moderate, liberal, and very liberal. I then plotted these cutpoints and McCain's NOMINATE mean throughout his career. The resulting chart takes into account the polarization which occurs between the two parties during the period and represents how McCain fares by comparison. 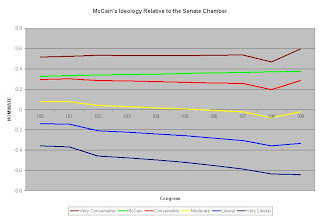 According to this metric, McCain falls consistently in the conservative camp during his entire Senate career.

So, is a McCain a conservative? Compared to the voting behavior of his Senate colleagues, he's been a consistent conservative. Compared to the voting behavior of his Senate Republican colleagues, he's a moderate. It is clear, however, that calling Hillary Clinton more conservative than McCain, as Ann Coulter has, is absurd. Hilary Clinton's NOMINATE score of -.496 from the 107th Congress on puts her squarely in the liberal camp in the U.S. Senate among her chamber colleagues and to the left of her party's mean. If anything, McCain has become more conservative relative to Clinton during their time in the Senate together.
Posted by David Parker at 10:00 PM