As the 2008 race for the Democratic primary continues to play out and Obama strings together victory after victory, some have reported that Texas and Ohio on March 4 are do or die for Hillary Clinton (see here). I tend to agree.

What is more interesting from my perspective, however, is how the differences between the Democratic and Republican nomination rules have produced very different delegate count outcomes between the two parties. I tell my students that rules matter, and this is yet another example. A series of winner-take-all rules in a number of states have allowed McCain to magnify the effect of close, plurality victories in the popular vote. The Democratic Party, however, does not allow winner-take-all contests. Rather, the vote in each nomination event must be apportioned proportionately.

If the Democrats had winner take all rules for their contests, could that alter the dynamics of the nomination fight?

What I've done in this chart is to calculate the culmulative delegate total under two scenarios: a winner take all scenario for each nomination contest and the proportional rules that currently exist. Then, I totalled the number of delegates each candidate wins on each day of the election calendar thus far. CWTAC and OWTAC are the culmulative vote totals for Clinton and Obama under a winner take all scenario at the end of each election day, and CP-C and OP-C are the proportional vote totals for Clinton and Obama, respectively. 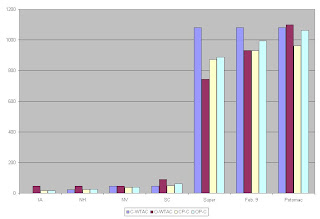 What are the consequences of winner take all rules? Look at Super Duper Tuesday. By the close of business that day Hillary would have had a 300+ delegate advantage over Obama. But under the existing arrangements, Obama had the pledged delegate advantage by 16.

Under Winner Take All, Super Duper Tuesday would have clearly given Hillary the Big Mo. Under the plurality system, Barak is able to claim to have carried his momentum from South Carolina into Super Tuesday and beyond.

Now, let's do a little predicting. Let's see what competing under each set of rules does to the February 19 and March 4 contests. I've awarded wins to Obama in HI and WI (Feb. 19) and in Vermont on March 4. Hillary wins Texas, Ohio, and Rhode Island. For the sake of argument, let's say Barak wins WI and HI with 60 percent of the vote, and Hillary wins her states with 55 percent. Obama wins VT with 60 percent.

Now, look at the next chart. Under winner take all, Hillary moves ahead of Obama in the delegate count by more than 200. Under the existing rules, Obama is still the front runner. 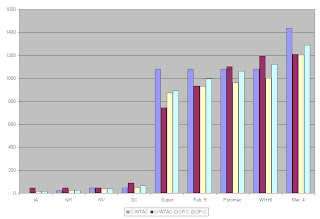 The consequence of the Democratic plurality rules is clear: it makes it very hard for a candidate in a competitive two-way race to break away. The end result of the 2008 Democratic primaries and caucuses might be a decision made by the superdelegates. What an irony in a system that was devised, initially, to be more responsive to the will of the people. Had winner take all rules exist, Super Duper Tuesday--as the Clinton's had argued all along--probably would've had sealed the deal for Hillary as the nominee.

I'll leave it up to you to decide whether the superdelegates should ratify the choice of the electorate or to select the nominee based upon their own set of criteria (which, of course, is the classic delegate versus trustee tradeoff members of Congress make all the time).
Posted by David Parker at 8:17 AM

This is a great summary of an issue I had been contemplating as the republican's come to a definitive nominee and the democrats debate. As Obama supporter, I say let the popular vote win and not have any superdelegates. Actually why do we need delegate counts at all?

The Democratic Party, unlike the Republicans, have spent considerable time over the past decades revising their delegate rules. The reasoning behind the superdelegates was adding a safety value to protect the party from itself.
Consider the Republican experience in 1964 and the Democratic experience in 1972. In both cases, a powerful, vocal, and well-organized group of young activists dominated the primary selection process. These groups did not represent the party majority and look what happened: election blow outs in both cases that hurt not just the party nationally, but candidates down the ticket.

Given that candidates run on a ticket and the person on the top of that ticket can affect the fortunes of tickets below, it makes some sense that those affected would have some voice in the selection process.

Finally, given the Founders initial skepticism with majority rule and Madison's particular fear of majority tyranny, the Democratic institution of superdelegates provides a similar protection from democracy "gone wild". Unfortunately, superdelegates don't work quite as well with the system of proportional representation Democrats have in place in the primaries.