Experience and the VP slot

In this election, the experience question was most dramatically raised in the Democratic primary. Hillary Clinton ran ads suggesting Barack Obama did not have the experience necessary to answer the phone at 3 am. And over the summer, the McCain campaign attacked Obama as a celebrity with no experience. Now that Sarah Palin has been announced as McCain's VP nominee, the question has been raised again: does Palin have enough experience and the right experience to take over for McCain should the unthinkable happen?

First, let me say there is no constitutional mandate outlining the proper mix of experience. The only qualifications concern residency and age. That's it. The entire debate, then, is about the popular perception that experience matters and that some experience is better than other experience.

I was curious. How much experience did Sarah Palin have compared to other VP nominees in the twentieth century? And how does her experience as an executive--which the McCain folks argue is particularly important and useful--match up against other nominees?

I researched the backgrounds of each Republican and Democratic nomineee for Vice President, beginning in 1900. I looked only at elected office experience. Congressional scholars use this to define a quality challeger, so I employ the same definition here. I make no claims about the quality or type of experience in this analysis. That's up for you, the reader, to judge. I simply want to look at one easily quantifiable measure of experience. This chart here compares the Democratic nominee (in blue) to the Republican nominee (in red) in each election cycle: 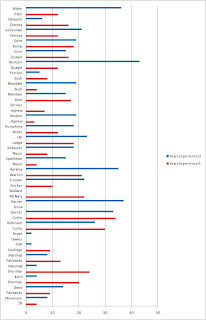 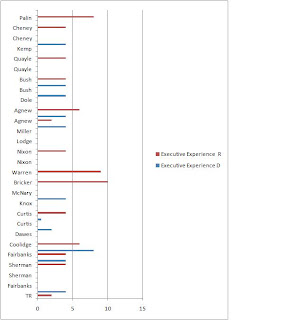 This was a very interesting post with statistics that would not be presented in most media. I personally don't think experience matters as much as most people might, but that's not to say I think Palin is 'qualified.' As to the quality of that experience, which you admitted you would diplomatically leave out of the equation, I think Jon Stewart makes a clever allusion to this: