Madam Speaker: Use the Rules! 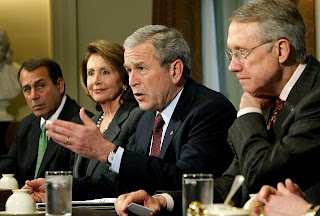 There's an extensive commentary about whether the bailout is the right thing to do.

And there's also an extensive commentary about why the bailout failed in the House yesterday.

I think the bailout vote failed in part because the majority party didn't make good use of their most powerful ally: creative rules.

Most major legislation is brought to the House floor by using a rule. As I tell my students in my Legislative Process class, when bills emerge from committee they are placed on the House Calendar. However, very often major pieces of legislation need to be acted upon before their place on the calendar. In these instances, the majority party leadership will ask the rules committee for a rule to bring the bill up for debate earlier. And in the case of major legislation that is very carefully crafted, the majority party will ask for a rule to protect the carefully crafted compromise from hostile amendments.

In absence of a rule governing debate on a bill, nearly anything can happen. Anyone might submit an amendment, and debate might drag on for sometime. Instead, rules typically proscribe the length of the debate and the amendments that will be in order. Before taking up a bill with a rule, the rule is debate and voted upon first, and then--once the rule passes (a near-certainty)--debate will be take up under the guidelines of the rule.

For example, a rule might indicate that debate will be for one hour, with time equally divided between proponents and opponents of the bill. No points of order will be allowed, and only two amendments made by the chair of the committee of jurisdiction will be allowed.

Why didn't those Democrats vote yes? Because the bill put them in a tough position. Much of the public is opposed to the bailout, and in this instance, those members chose to act as delegates rather than trustees. And who could blame them?

Pelosi, though, could have anticipated this and drafted a rule that would have allayed the concerns of these members. For example, she could have brought the bill up for consideration under a King of the Hill rule. This rule allows votes on several alternative versions of the bill. The bill that is in the final position is the only vote that will count.

So, one could imagine crafting several different versions of the bill to allow those members in tough re-election fights to vote for or against several other versions of the bill and then casting their vote in favor of the final version. Then they could go back to their constituents and say: "I voted against all these harsher versions" or "I voted for all these harsher versions" before I doing the "right" thing and voting for the compromise legislation.

But Pelosi didn't do that. The bill failed, and the stock markets collapsed.

Pay careful attention to what the leadership does next. Stay tuned, and follow the rule and the proposed legislation here.
Posted by David Parker at 2:36 PM