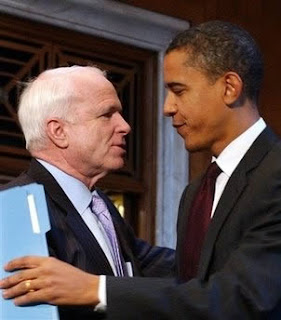 Obama says he will bring change and a new nonpartisanship to Washington. McCain says he's the original maverick, and has the experience to prove it. Biden says McCain voted with President Bush 95% of the time; he's no maverick. The Republicans say Barack has no record of acting bipartisan in Washington.

The problem with cherry-picking data is it feeds into the old adage that students so often like to cite: "You can make statistics say anything."

Biden's statistics are correct: in 2007, John McCain supported President Bush 95% when the president announced a stand on a Senate roll call vote. This is according to the presidential support scores calculated by Congressional Quarterly annually, and used by political scientists who study both institutions. Unfortunately, this does not necessary answer the question of whether McCain is a maverick or not. Some media accounts report that there were a lot of immigration votes that year. It just so happened that Bush and McCain agreed on immigration: the problem was, the rest of the party left them hanging dry. Presidential support scores are problematic because they take a small subset of Senate roll call votes and don't give a good sense of whether someone is willing to buck the party.

For example, a party unity vote has to have at least half the Republicans voting nay on an issue and half the Democrats voting yea to be considered in the analysis. This eliminates procedural votes and commemorative legislation that often passes with overwhelming partisan majorities. This gives us a better look at who is willing to buck the party on a number of issues, whether the president takes a stand or not.

Here's a chart of McCain's Party Unity Averages by Congressional session, beginning with the 100th Senate and ending with the 109th. Next to McCain's score, you'll see the Republican Senate average for that session:

Like many members of Congress, McCain voted more often with the party early his career began to become more independent the longer he served. Indeed, we begin to see this drift during the 105th Congress (1997-1998). Three times, McCain's party unity average is almost a full standard deviation below the Republican mean: in the 107th, 108th, and 109th Congresses.

McCain is no Ralph Hall (who exhibited party unity scores in the 20s and 30s as a Democratic Representative from Texas in the House. He later switched parties and became a Republican). But he's clearly NOT the party unity poster boy Biden's comments make him out to be.

Now, what about Obama? Well, I only have data from the 109th Congress available to me. The Democratic party unity average in that session was 89 percent. Senator Obama's average was 96 percent. This suggests there is some truth to McCain's claim that he has the record of a maverick and Obama does not. Even Obama's running mate rated a 90 percent in the 109th Congress.

Now whether you knew McCain was a maverick from last night's speech, that's a different story.

Next time, I hope to do an analysis of pre-VP nomination experience to evaluate the claim that Palin has precious little experience compared to other past nominees.
Posted by David Parker at 12:51 PM

This absolutely doesn't matter. Whether or not John McCain is considered a maverick has no implications for getting us out of Iraq. That the majority of the US public is in favor of withdrawal only makes his position on the specific issue of Iraq look arrogant. For other major issues such as health care, a fair tax system, and abortion he still stands by the Republican ideology, which is actually in the minority. McCain's not even a maverick on other issues, because like all his Republican counterparts, he knows little about the economy, doesn't know how many houses he owns, he's had an ugly scandal (Keating 5), and cuts tax breaks to rich people.

I'm sure why it doesn't matter. Doesn't this give us a sense for how a person might govern and whether they will be successful in how they govern? That seems to me to matter a lot, no?

If anything, what we know about McCain is that he 'shoots from the hip.' The John McCain who was against the Bush tax cuts, and now in favor of them? The John McCain who denounced the Evangelical figureheads in 2000, and now panders to their lifeblood support? Even if statistics can show he's a "Maverick," he is unpredictable and rash, something even his Senate and naval acquaintances have relented to. Yes, ironically, Obama as the "newcomer" is more predicable than McCain, if that's what you really want. But no, "Maverick" sounds heroic, to Republicans, doesn't it?

Instead of playing up the heroic image, the "Maverick" label, why not focus on the issues? In my opinion, that is a better estimate of how they will govern. Will they get us out of Iraq? Are they promising fiscal conservatism alongside a commitment of billions, nay, trillions of dollars to the military contractors, that goes undocumented because we're writing it off? Spin it how you like, it still comes down to the issues. At least for informed voters...

So, consistency is the best indicator of successful leadership?

OK. One might say consistency is Bush's strong suit, and my guess is you don't like his leadership.

On issues, the presidency is interesting in that many voters DO NOT vote on issues. Rather, they vote because for the person with whom they feel comfortable.

My guess would be that the first and second anonymous post here is a supported of Obama, or at least won't vote for McCain. The part of your argument that I don't understand is how you seem to be so critical of McCain and his "Maverick" label, and thus urging him to focus on the issues, when Obama for the most part of any of his speeches and nearly all of his ads focus only around "Change" and "Yes we can!". Where is the criticism of Obama in this respect. Why is Obama not sticking to the issues. The only thing we know is that he supports "change", whatever that might be. All I'm saying is if you're going to make a vaild argument, then make sure the same argument can't be made toward the opposition.

that's a fair point, yes. Neither Obama nor McCain focus on the issues as much as most people would probably prefer, but I attribute that more to the media than anything else. Still, they should both be held partially responsible. But I will repeat myself, that McCain's "maverick" image is not the ideal way to characterize how he might govern, which is given as the reason for the post.