The first presidential debate, on the campus of Ole Miss, will be held this Friday at 6PM MDT. Given that the political conventions this year drew the largest television audience in history, I suspect these events will be well-watched and will help many voters make up their minds. 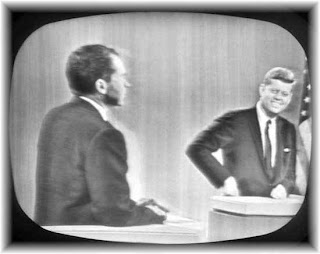 To put the debates in perspective, here's a link to a great website with resources for all the past presidential debates.

The first televised presidential debate was in 1960 between JFK and Richard Nixon. Interestingly, people who heard the debate on the radio felt Nixon had won and those who watched the debates thought Kennedy had. The television audience was larger, and when you watch footage of the debate, it is easy to see why Kennedy was perceived as the victor: he looked confident, tanned, and attractive. Nixon, with his shifting eyes and four o'clock shadow showing through without the benefit of makeup, confirmed the suspicions many had of him. Fair or not, the image of JFK may have made the difference in one of America's closest presidential elections.

The key goal in a presidential debate is to at least meet expectations and not make any mistakes. Ford's claim that the Soviet Union did not dominate Poland probably hurt him in 1976. Reagan's performance in 1980 demonstrated that he wasn't the reactionary nut the Carter administration tried to paint him as, and George HW Bush's looking at his watch in 1992 during the town hall debate fed into the perception that he didn't understand the average person. And who can forget the first presidential debate in 2000: Al Gore's sighing, and Bush's inability to project confidence and policy knowledge.

Here's what I will be looking for on Friday:

Can McCain project energy to overcome the Obama's youthful image?
How will Obama deal with McCain's attacks?
Will McCain keep his temper in check?
Can Obama actually take the gloves off without coming off as mean (remember his snide remark to Hillary, "You're likeable enough?")
Can Obama articulate a vision of America and project an understanding of the average citizen?
Can McCain blunt Obama's advantage on the economy?