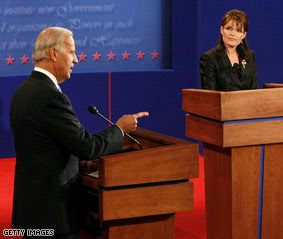 Spent another fun evening watching the debate with Montana State students. A couple of points:

1. Students thought, overwhelmingly, that Biden did a better job and won.
2. Of the three undecided voters in the room, two thought Palin had won and one called the debate a tie.
3. I asked students to write tomorrow's headline and consensus was "Palin holds her own in the debate."
4. I then asked if this was the headline, didn't Palin win?

Perceptions matter, and if Palin held her own and that's the story, then perhaps she "won" the debate--if not on points--then on general perceptions.

Nevertheless, the students felt--and I agree--that the debate was not a game changer. And given that Obama is moving ahead at this point, this hurts McCain.

I thought Palin's answer curious. Certainly, it spoke to the base. But I'm not too sure it was a good answer for independents or wavering Democrats.

I must admit, I'm not too excited listening to partisans on TV "analyzing" who won or lost the debate. We KNOW what they are going to say...(Chris Matthews to Bill Richardson, "Who do you think won the debate". Bill Richardson: "Joe Biden". DUH! Big surprise).

Again, I was very impressed with the care and thought the students put into analyzing and thinking about the debate. Bravo! You will all become social scientists yet!
Posted by David Parker at 10:26 PM

libscifi@gmail.com said...
This comment has been removed by a blog administrator.
October 4, 2008 at 4:32 AM

I was watching the debate on Thursday trying my hardest not to judge too quickly. However, for me when the debate started off Biden was looking more confident in the surroundings. Palin looked more like an animal caught in the headlights. Not really comfortable with what she was forced into.

As the debate started Bidens confidence continued. He seemed to be able answer (sometimes barely giving them an acknowledgment in attacking McCain) the questions in a manner from which you could believe that he knew the information involved even while bringing his answers back to attacks on McCain.

On the other had Palin never really seemed to be able to handle questions the same way. Many times it seemed that she was taken back at first trying to remember what she had been told to say or not to say. But once her answers came forth they, for the most part, did not address the actual question. You could almost see her remembering her flash cards and reading off her answers. It also seemed that half the answer to any question asked on any topic seemed to either come back to Alaska being an energy producing state or that John McCain is a maverick and so is she.

So what did Biden do well in this debate? He made the effort to follow the questions that where given to him and also wasn’t afraid to use them to score points if he could. He also came off prepared and I think showed enough of his character for people to believe that this person could be president.

Where did Biden fail? Well I would have liked for him to take on Palin for some of her responses. I would have liked see him challenge her more on different issues and to not treat her like a delicate flower. However some believe that attacking her would have made her more sympathetic to independents which would have been a loss for the dems. He also tended to feel like he had to teach people about how different parts of the government worked. For me this wasn’t a bad thing in the least but the fact that he didn’t stick to sound bites and powerful but somewhat empty answers hurt him in not being able to talk to the American people.

What did Palin do well in? She was able to make some more appealing statements that made people feel like she was one of them and that she knew what they where going through. She also was able to reconfirm her folksy ways. More people probably want to have a beer with her now then Biden which I don’t think is a very good way to elect a president or vice president but it does work. And last but possibly the most important thing she did or didn’t do was fall flat on her face. There where none of her gaffs as exemplified by the Katie Couric interview. She came out of there with her dignity intact.

Palins failures? I thought there where many since I am biased against her. But I have tried to temper them. To me her biggest failure in this debate was that she was aiming so much at not making a complete fool of herself that she really wasn’t there. So many of her answer seemed scripted and where repeated so often that you got the impression that they had taken her to a back room and gave her cards to memorize. And I felt that beyond her memorized responses she did have a deeper grasp of what was going on. I saw this most in one of her last answers where she got the question then stood there for a while trying to see if she had any idea what to say. Was there anything on her cards that could help and upon deciding that there was nothing of use in her memorized responses she just decided to ignore the question. She fell back on her old energy policy and McCain the maverick crutch.

As for the winner of the debate that’s some what difficult to say. Biden won the actual debate hands down by any debate scoring system. This however does not tell the whole tale on who won. Biden performance while good did not really have anything in it that would have independents or undecided democrats and republican flock to Obama. So it wasn’t really a win but certainly not a lose for Biden. Palin lost the actual debate there is no question in my mind about that. She didn’t do badly but didn’t really compete with Biden in the debate. But she won huge in that most pundits and people watching the debate had such low expectations for her performance that when she was able to form coherent sentences it greatly increased their opinion of her. How much of a win this actually was can’t really be determined now. My feeling on this victory is that it was very hallow. By claiming this victory seems to have acknowledged that this is the best that she can do. That we have to treat her like a flower because she really screws up if she is put under anything but scripted pressure.

So Biden won the debate its self but Palin came out on top in that she did more for her party and ticket. Presenting herself as a viable VP, to her constituency at least, and possibly stopping some of the slippage in the polls.