And now Rehberg's numbers for the third quarter are out. Looks like he raised just under $700,000 and Tester raised more than $1.2 million. See Matt Gouras' story here.

Much of the emphasis will be on how Tester continues to outraise Rehberg. That story line is less important: incumbents typically outraise challengers. There are three key questions that must be asked:

1. Does Rehberg have enough money to carry out his plan?
2. What kind of outside support will both candidates get?
3. What's each campaign's burn rate?

I'll look at that information in an upcoming post. Bottom line: both candidates will be well-funded and will have the resources they need to win. Remember, many of the challengers who toppled incumbents in 2006, 2008, and 2010 did not spend the most money. The critical question is this: is there enough money to make the race competitive?
Posted by David Parker at 11:16 AM No comments:

The first hints of how third quarter fundraising went for Senator Tester and Congressman Rehberg are now available. According to AP, Tester continued his torrid pace and again raised more than $1 million dollars. See the story here. Congressman Rehberg's numbers are not yet available.

This is further evidence, folks, that the Senate race between these two is likely to break fundraising and spending records here in Montana.

More later when the Congressman's numbers are announced.
Posted by David Parker at 2:10 PM No comments: 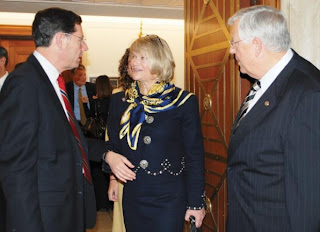 In preparation for my book on the Montana Senate race, I’ve been doing some reading not only about the American West generally and Montana history specifically, but about representation. The key question driving my interest in the campaign is how two candidates—both of whom represent the same geographic entity—represent differently. Political scientist Richard Fenno discusses representational strategies from the of senators and representatives extensively in his public work and I’ve written on this subject in the past (Parker and Goodman 2009; Goodman and Parker 2010). Essentially, Fenno says that members assess the various constituencies within the geographic constituency and use particular groups to build an electoral coalition.

Wendy Schiller’s excellent book, Partners and Rivals, provides some answers to this question. According to her research, senators develop their own areas of legislative expertise in developing independent reputations. In particular, Senators from the same party are pushed to differentiate themselves from their senatorial colleague in order to receive attention from the media and develop unique impressions among their constituents. Dr. Schiller looks at an impressive range of data to buttress her findings, looking at the committee assignments pursued by senators, patterns in bill sponsorship and co-sponsorship, and coverage by the local media of Senate delegations.

I’ve decided to put Schiller’s model to work in helping me to better understand the representational dynamics that occur in states where three elected officials represent the same geographic constituency: that is, those states with two senators and only one member of Congress. These states are Alaska, Delaware, Montana, North Dakota, South Dakota, Vermont, and Wyoming. Before adding the wrinkle of House members, let’s first look at the Senate delegations in these states. Do we see a similar pattern in these small states that Schiller finds among all senators—that is, do we see senators attempting to develop distinctive and largely independent legislative portfolios? For this analysis, we are going to look only at Senate delegations from the states above between 2007 and the present. Second, in this first cut, we are going to limit ourselves to examining the committee assignments pursued by the senators. If Schiller is right and size doesn’t matter, we should expect to see little if any overlap among the committee assignments pursued among the Senate delegations. 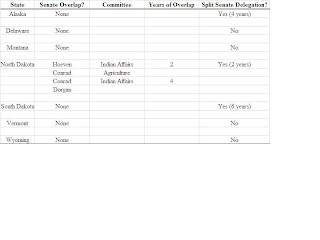 Table 1 lists the seven states in alphabetical order and the committee assignments among delegations where there is overlap. Note that overlap is exceedingly rare and unusual—a pattern which is similar to what Schiller observes among all Senate delegations between 1988 and 1992. Only in North Dakota do we see overlap, and in the case of Indian Affairs, the overlap is on a minor committee. One caveat is in order: Senate rules prohibit senators from the same party in a state from serving on the same committee (exceptions are made for minor committee assignments). Glancing at the table, four of the six Senate delegations share the same party, so even if overlap were desirable it is exceedingly unlikely to occur.

I see two competing hypotheses which could explain the committee assignment decisions of House members where they share the geographic constituency with both senators. First, the Diversity Hypothesis. Even in small and relatively homogenous states there are a diverse range of interests which need to be represented. Members of the House of Representatives, both to represent those issues for the benefit of and to carve out distinctive reputations, seek committee assignments to represent those under-represented interests.

Second, the Protection Hypothesis. Small states perceive themselves as particularly vulnerable politically in the chase for federal dollars. Most small states receive more money from the federal government than they pay in federal taxes, but those dollars are always at risk politically from the larger states that lose in this deal. In addition, those federal dollars are especially important in the smaller economies of these states and their loss would get noticed quickly and negatively by constituents. To protect those dollars and the interests of , House members are apt to seek committee assignments to “protect” the work and deals made by the senatorial colleagues on their committees. 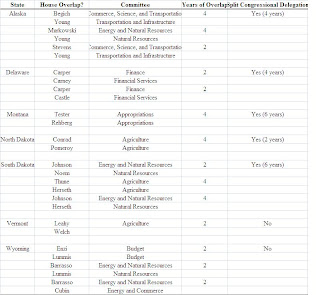 Table 2 cannot definitely answer whether the Protection or Diversity hypothesis provide a better explanation for patterns in House committee assignments and their overlap with Senate delegations. In order to provide some hints a relative measure of overlap is required: how much total overlap might we observe in a congressional delegation and how does this maximum possible overlap compare to the overlap actually observed? Table 3 provides a crude measure of this. The measure is crude because, quite simply, the size of committee portfolios is not a constant. Some senators and representatives have many committee assignments, others have fewer—and the patterns differ from state delegation to state delegation. To deal with this, I calculated three statistics for each congress: the percentage of Total Overlap, the percentage of House Overlap, and the Maximum Possible House Overlap. These are described as follows: 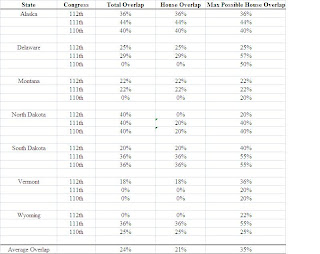 What does Table 3 tell us about representation in small states on committees? First, the data confirm the findings of Tables 1 and 2: committee overlap in small states is largely driven by House members appearing on committees jurisdictionally overlapping with the committees of their Senate colleagues. As Schiller notes, senators do appear to represent the diverse needs of their states and carve out distinctive legislative portfolios. Although there are distinct differences between congressional delegations, the data also seem to provide more support for the Protection Hypothesis than the Diversity Hypothesis concerning the choices made by House members. One third of the time, the Maximum House Overlap and House Overlap statistics are the same value. On only four occasions are the House Overlap values zero, and the rest of the time there is at least some committee overlap between the lone member of the House and her Senate colleagues. This seems to suggest that while the Senate is a place that pushes individual senators even in small and relatively homogenous states to represent a range of interests in their states, House members do not necessarily feel compelled to carve out distinctive reputations or represent other interests that may not be represented by the Senate delegation. One might conclude that the Senate delegation adequately represents the range of interests, but that conclusion is unlikely. Even the smallest states will have interests that go unheard and unheeded in the Senate. More likely, House members in single-member states either hope to “co-op” the legislative accomplishments of the Senate delegation by seeking similar committee portfolios or to demonstrate clout by seeking committee assignments to allow them to receive singular credit for protecting a state’s interests. It might also demonstrate the importance of legislative cooperation necessary for small states to maintain their outsized clout in Washington—a cooperation that is well-understood by representatives and senators representing thinly-populated states that are extra-reliant upon federal dollars.

This post represents my first cut at the question. I welcome feedback, and will continue to explore this issue with additional data in upcoming posts.

Posted by David Parker at 3:01 PM No comments: