Senate Stevens is a cooked goose

Today, the DOJ announced that a grand jury has indicted Senate Ted Stevens, the longest serving Republican in the Senate, on charges of lying about gifts and services he received from VECO Corporation in excess of $250,000. 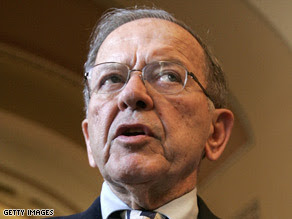 Stevens was already facing an uphill battle as the popular Democratic Mayor of Anchorage, Mark Beigh, is running against him. He's also being challenged in the Republican primary.

In researching my next book, Losing: When Incumbencies Fail, lots of factors explain why incumbents fail to get re-elected: age, perceptions of incompetence, partisan tides, maverick behavior that undermines support within your party, first re-election test, and scandal. Scandal, however, particularly the kind that involves personal ethics and judgement, is generally the kiss of death for an incumbent. It is really, really hard to convince constituents to trust you when you are being charged with corruption and bribe-taking. And it is a very powerful narrative for a challenger to employ.

This spells serious problems for Republicans. Alaska is fairly safe Republican territory and a seat they need to retain in order to have any hope of stemming Democratic gains in the Senate this fall. The prospect of losing this seat is a bad omen for them indeed.

It also continues to tarnish the party's brand name. The last thing Republicans wanted was the Culture of Corruption argument to haunt them in a second election cycle. How can it not when the Dean of their party in the Senate can no longer serve as ranking member because of the Senate's rules preventing those under indictment from doing so?

If your a Democrat, you should be smiling with glee. If you're a Republican, things look pretty grim (a la 1974 grim).
Posted by David Parker at 1:05 PM 2 comments:

The New York Times had an interesting editorial in yesterday's edition. It concerns county and city ordinances restricting the placement of campaign signs on lawns. See the article here.

I sent a letter to the editor today concerning their editorial. I applaud the New York Times for drawing attention to these noxious ordinances, but perhaps a greater threat to our constitutional freedoms are the condominium and home owners associations we join when we buy property. In many instances, these associations have covenants and bylaws curtailing, and some instances banning, the placement of signs--political and otherwise. While constitutionally permissible (the association is a private association and individuals are not compelled to join them), these sign bans are troubling. Many Americans sign away their rights without knowing it, but worse, it curtails political speech--the type of speech most cherished by the Founders and receiving the most protection from the courts. These restrictions are often defended as a way to protection home owner investment and the value of their home. I know of no empirical evidence or study that suggests that campaign signs undercuts the real estate value of a home. Besides, shouldn't we care more about the freedom to speak our mind and engage in the democratic process than whether we gain or lose $100 off the value of our home?

For example, here's language from my townhouse association documents here in Bozeman: 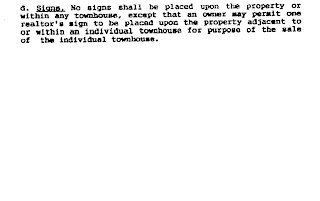 I urge you to check out the bylaws for your association and consider mounting an effort to protect political speech in our communities. Two years ago, to protest our ridiculous sign restrictions, I put signs for both the Democratic and Republican congressional candidates on my lawn. Strike a blow for freedom: plaster your lawn with campaign signs come this fall.
Posted by David Parker at 8:13 AM 1 comment:

Flip Flopping: When is a flip a flop? 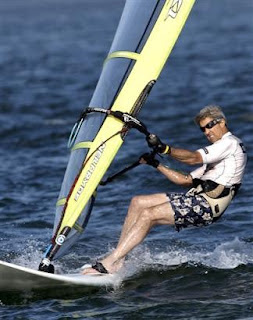 John McCain, a self-proclaimed Republican maverick, has long been known as a deficit hawk. He has attacked pork barrel spending with glee, in part to emphasize the need to spend carefully and balance the budget.

It was in part a desire to balance the budget that led to his opposition to the Bush tax cuts, as they were not offset with sufficient program cuts.

Now, he's running for president, and he supports extending the tax cuts permanently.

Barack Obama won the primary, in part, on his opposition to the Iraq War. Now, he's willing to weigh his options after travelling to the war zone later this week.

Both have been tagged by the media, and each other, as flip floppers. Certainly, a characteristic that people admire in politicians and leaders is fortitude and a clear sense of purpose. Flip flopping is seen as opportunistic. For example, Hillary Clinton received a lot of flak for calling for a gas holiday--a stance which seemed out of place with her emphasis on green jobs and the environment. And can one forgot John Kerry's "I voted for it before I voted against it?" How come Hillary couldn't get a way with a flop, when others--such as Ronald Reagan (the avowed tax cutter who raised taxes)--can? And when should we judge a flip-flop truly a flop and problematic?

There are no hard and fast rules about flip flopping. Sometimes, the answer lies in the salience of the issue. Flip-flopping is easy when the issue isn't on the radar screen or considered to be very important to voters. Sometimes, politicans can flip flop because their credentials are so solid that they can't be suspect (Ronald Reagan's years of espousing tax cuts and smaller government). It is harder when the issue is important among voters, or if the issue cuts at the core of the politician's individual brand name.

McCain has not flopped on Iraq, but has on taxes and on the environment (see off-shore drilling). Interestingly, his firm stance on Iraq and the surge may have proven correct, but it is also an issue on which the public is firmly against him. In this instance, McCain might be hurt by his unwillingness to flip-flop, especially given Bush's general intransigence is no longer seen as a strength among the public.

Barack's flip-flop, on the other hand, may not hurt him at all. A willingness to reassess the situation on the ground when new facts present themselves is a mini-flip flop, and doesn't really undermine his anti-war credentials.

McCain's flip flops, particularly on taxes, strikes at the core of who he is. It might shore up his support among his political base, but strikes others (independents and Democrats) as the political opportunism that Hillary displayed in support of the gas tax holiday (which McCain also supports). Furthermore, his unwillingess to move on Iraq hurts his maverick brand, as he appears to simply want to continue the Bush administration's policy.

McCain's key strength is his military experience and his willingness to talk straight. Whenever he flip-flops, he undermines that brand. Obama's brand is change. As such, flip flopping is less of a problem--unless Obama's flops make his look less like change and more like the same. In keeping an open mind about Iraq, one might argue Obama's position is consistent with change as the administration and McCain has been less willing to do the same.
Posted by David Parker at 11:23 AM No comments:

When I worked on a presidential campaign, one of my duties was to put together a memo for the candidate whenever he came to the state. The memo would include the price of a gallon of milk, bread, and a gallon of gas. Why did my candidate need this information? Because if he didn't know the price of these things when asked by the media, he'd be accused of being "out of touch" with the concerns of average Americans.

Well, it's begun again in this political season:

Symbolism is powerful in politics: Gerald Ford munching into a tamale without taking off the husk, George HW Bush in awe of a grocer scanner, Mike Dukakis in the tank. But, let's be real here: wouldn't you rather have your candidate concerned with knowing what's going in Iraq or Afghanistan than whether they pump their own gas?
Posted by David Parker at 8:25 AM 1 comment: