Ike and Mac; Korea and Iraq

In 1952, the country was deeply entrenched in an unpopular war across the globe. Opponents of the Korean War called it, "Mr. Truman's War". The country wasn't in the best shape economically, either. Steel strikes threatened production, and Truman took an expansive view of executive powers to seize the mills to keep them in production, fearful that if they shut down, the troops wouldn't have the materials to fight the war.

Does this sound familiar? 2008 is similar--economic troubles, an unpopular war, and an administration that has sunk to near historic lows in Gallup approval ratings. Both in 1952 and in 2008, an unpopular incumbent was leaving the White House, and the party's nominee had to deal with the fallout. The only difference is the unpopular administration in 1952 was Democratic, today it is Republican.

Despite a wide-advantage in party identification, Eisenhower was able to beat Adlai Stevenson in 1952. How? In part, Eisenhower was enormously popular personally, as he lead the Allied forces in defeating the Germans in Europe. And, his background as a general provided him with an advantage over Stevenson: he could credibly claim that he would go to Korea personally and end the war.

If McCain wants to seriously contend in the fall, perhaps it is time for his own Ike moment. Iraq may have receded as a problem in the minds of voters, but Iraq is intimately tied to the economic concerns that are at the forefront of the campaign. Instead of saying we need to stay in Iraq, McCain needs to say he has the experience, the ability, and will to go to Iraq and get us out of the quagmire. At the very least, it might help him neutralize the advantage Obama has on this issue. While Obama can rightly say he was against the whole episode from the start, it is less clear that voters are willing trust that he has the experience necessary to produce a favorable outcome. McCain's claim has the potential--by the dint of his experience--to be viewed credibly by the voters.
Posted by David Parker at 12:52 PM No comments:

Who owns who? Tuesday's Onion Funny.

I went to grad school in Madison, WI and read the Onion every week. Now they have video!

I like this video because, while it makes fun of the notion that lobbyists aren't getting what they want from politicians when they donate money, it gets closer to the truth than the average citizen might think. First, interest group money tends to flow to politicians who are already ideologically aligned with the interest group's goal. Money doesn't "buy" votes per se. Second, politicians also wield an incredible amount of control over the lobbyists themselves. In the 19th century, it was not uncommon for lawmakers to pass legislation designed to blackmail corporations or other interests. The corporations would be forced to donate money to the party in order to have the law, which undermines the corporations interests, repealed. Today, what lobbyist in DC ignores a summons to the fundraiser hosted by the chair of the House Appropriations Committee? Just look at where corporate money has flowed after the 2006 elections: the Democrats. Why? Corporations would certainly prefer a Republican majority as more favorable to their interests, but woe is the corporation and its lobbyist firm that ignores giving donations to the new majority in town.

And that is the true power of money: it may not buy votes, but it most probably buys access and a seat at the legislative table. For all the ink that is split on the power of lobbyists and their money, in fact, we'll never know which bills or amendments are NOT offered because a donation is given.


In The Know: Are Politicians Failing Our Lobbyists?
Posted by David Parker at 8:35 AM No comments:

Now that the nominees for both the major parties are settled, it's time to talk about another nominee who has largely escaped notice: Bob Barr.

In late May, the Libertarian Party nominated for president former Republican Congressman Bob Barr. Barr's nomination will undoubtedly cause John McCain problems come November, and he may very well play the role of spoiler that Ralph Nader did in 2000.

McCain is viewed warily at best among conservative Republicans, particularly those who are religiously conservative. But he is also viewed with suspicion among Hayek-espousing libertarians who don't support the war in Iraq. These folks, of course, contributed heavily to Ron Paul's campaign and routinely delivered 20 percent of the vote or more in late Republican primary states well after the nomination had been all but delivered to McCain.

The problem for McCain is these Ron Paul supporters are clustered in states where he needs to do well to win in November. Additionally, it is interesting to note the relationship between Ron Paul's support to Ross Perot's support in 1992.

The following table looks at Perot's 10 best states in 1992, lists the percentage of the vote George Bush got in 2004, and Ron Paul's performance in the Republican primaries (or caucuses, as the case may be) this year: 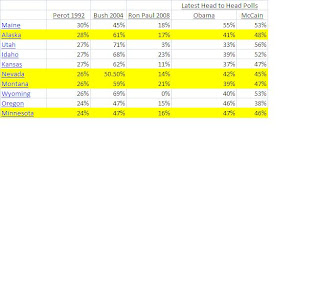 I then added the latest polling in these states on the matchup between Obama and McCain. The highlighted states, four in number, represent those states where Barr might possibly draw enough votes to tip the balance away from McCain in favor of Obama. Voters here have displayed a propensity to support third party candidates in the past, and have indicated a willingess to support a maverick member of the Republican Party this year. You can add Kansas to that list should Obama pick popular Governor Kathleen Sebelius.

The point of all of this is to say that Barr can help Obama in his effort to increase the number of states in play this fall. If McCain can't win Nevada, Alaska, and Montana, not only will he lose, he will likely lose big. Even more troubling from his perspective is Minnesota, a state that Republicans have tried to put into play since 2000. The latest polls indicate that Minnesota is again a swing state, but if Barr can pull even 5 percent of the vote (certainly not inconceivable given Perot's 26 percent in 1992 and Jesse Ventura's surprise gubernatorial victory a few years later), McCain's ability to put more "blue" states in play to force Obama to play defense himself will be severely hampered.

Add to this Obama's decision to opt out of public financing, and suddenly, the hill for McCain to climb becomes even steeper.

I should note that it appears that the Obama campaign has noticed this, too. Their recent ad buy reintroducing Obama to voters covers 18 states. Two of those states, Alaska and Montana, are Ross Perot-Ron Paul friendly states. One of those states, Georgia, is home to Bob Barr's former congressional district.
Posted by David Parker at 9:21 PM No comments: 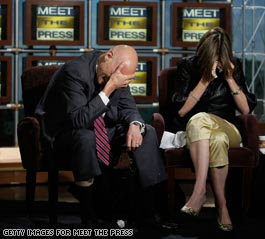 I think this says it all.

I'll miss you on Sunday, and I'm sorry you won't be here for the big dance in November.
Posted by David Parker at 3:09 PM No comments: