Is Ryan Zinke Aiming for the United States Senate in 2018?


Members of Congress go to Washington and establish reputational styles which help explain to constituents the work that they do while on Capitol Hill. There is no one way to “correctly” represent a place, but a representational style chosen by a member reflects in part the priorities of the geographic constituency the member represents and their own personal inclinations born from their pre-congressional careers. Richard Fenno (1978), in his book Home Style, documented the various representational styles developed by members of Congress and used by them when explaining their “Washington Work” back home. Fenno documents three rough representational types: the constituent servant, the policy expert, and the member of Congress as “one of us.”

I discuss these in detail elsewhere (Parker 2015, Parker and Goodman 2009, Parker and Goodman 2013), so I’ll be brief.. A constituent servant helps constituents with casework, policy experts work on legislation and develop proficiency in a particular issue area, while “one of us” representatives “work to display their connectivity to a place and a group—and through that connection, demonstrate trustworthiness” (Parker 2015: 15). 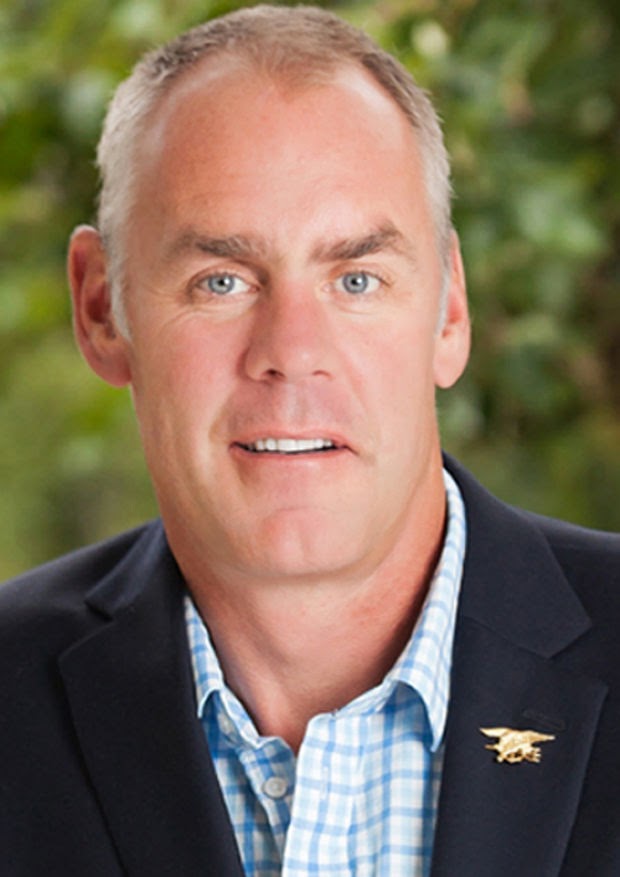 It is clear that Congressman Zinke is comfortably slipping into a policy expert representational style—emphasizing his defense and foreign relations credentials (which are bolstered by his membership on the House Armed Services Committee). This makes sense for two reasons. First, it allows him to draw upon a pre-political career, which is a considerable electoral and governing asset. Second, it allows him to establish a representational relationship without competing directly with Senator Jon Tester or Senator Steve Daines. I wrote a blog some time ago noting how House members representing a state share a representational space with two U.S. Senators (see also Wendy Schiller’s Partners and Rivals). Just as U.S. Senators need to figure out how to craft their own distinctive reputations, so, too, must House members representing a state. This is especially important because media coverage and space are at a particular premium in these smaller states; to get attention, you must be doing something different from the rest of the delegation.

Members of the House face an additional complication when they are the lone representative. Many House members develop constituent service reputations in the House. But, as the work of Lee and Oppenheimer (1999) demonstrate, constituents in small states are more likely to contact their senators to solve problems and address casework concerns because senators are just as accessible, if not more so, than the House members in small states. In fact, the Montana’s senators have nearly twice the personal staff as the House member and have more offices back home. One of Congressman Denny Rehberg’s biggest challenges in his 2012 campaign was overcoming this official resource disparity to compete successfully with Senator Tester—and it is this disparity as much as other issues that was responsible for his loss.

Congressman Zinke, in choosing to develop a policy expert representational style, is consciously avoiding the problem faced by Congressman Rehberg and other House members representing entire states. He is striking out in a policy area not clearly owned by either Tester or Daines, and he can establish a favorable reputation among constituents without necessarily being in the position to be unfavorably compared to the Senate delegation from the get go. Congressmen simply cannot effectively compete as constituent servants against their Senate delegation in big states. It is a losing proposition.

Congressman Zinke, unlike his fellow House freshman, is getting noticed by national news outlets. He has appeared on CNN’s State of the Union, on the O’Reilly Factor, and on Fox News with Sean Hannity. He was mentioned in a New York Times piece on veterans in Congress, and had an op-ed published in the Washington Times. This is very unusual indeed for a freshman House member.

How unusual? Let’s go to the data!

I searched Lexis-Nexis Academic between January 5 and February 19, 2015 for each instance a freshman member of Congress’ name appeared in print, in the transcripts of national news broadcasts, or on blogs. I then produced two quick scatterplots. Both scatterplots have each freshmen house member, alphabetically listed by state, on the X Axis.

The first scatterplot here has the number of mentions in national broadcast news broadcasts on the Y axis. The black line is the mean number of mentions, which is a bit more than one mention. The modal category is zero—meaning most House freshman in the 114th Congress are simply not mentioned by national news broadcasts. Congressman Zinke had five mentions—well above the average. I also indicate the other House freshman who had more mentions that Congressman Zinke. (Click on the plot for a larger version) 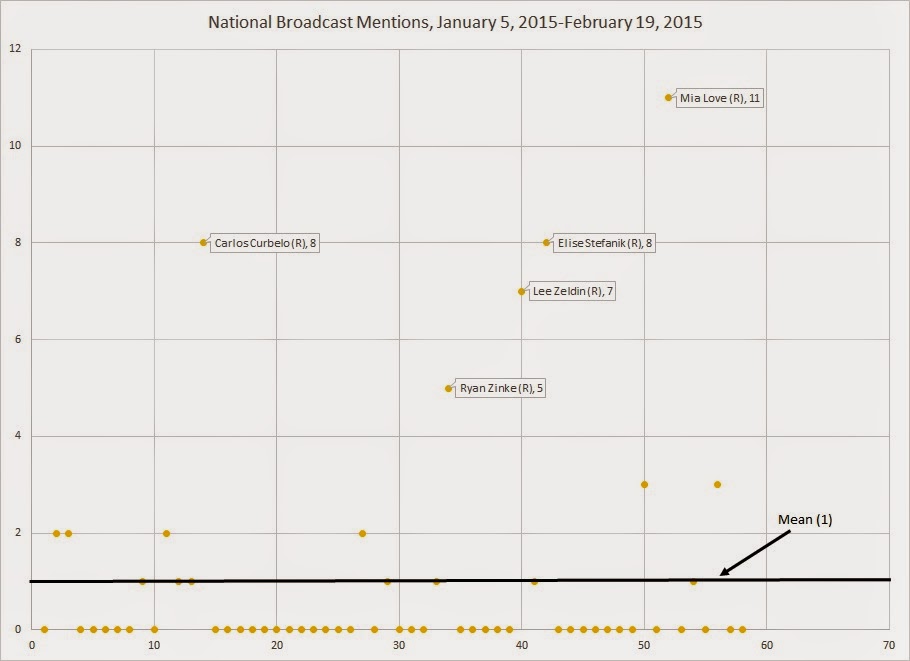 This actually underestimates, however, the attention Zinke has received. Congressman Zinke was not just mentioned—he was an invited guest on these programs on five occasions he shows up in the database. In each instance, Congressman Zinke focused his remarks on national security and foreign policy.


Only Congresswoman Mia Love, a freshman Republican from Utah, who is both Mormon and a Haitian-American, has received anywhere close to the attention from the national networks. And while she has been mentioned more than Zinke on national television, she has only been a guest on a national news program twice. In fact, what seems to explain the attention given to the other freshman are special descriptive qualities about them. Congresswoman Elise Stefanik is the youngest woman ever to serve in Congress. Congressman Curbelo is a Latino Republican who is becoming the party’s face on immigration. And Congressman Lee Zeldin is the only Jewish Republican in the chamber and is a vocal critic of the administration from his perch on the foreign relations committee.

In the second scatterplot, the Y-axis represents the total number of mentions of each freshman House member of the 114th Congress on national news and in non-home state newspapers and blogs. The mean mention was seven (indicated by the bold black line). Again, Congressman Zinke outperforms this by far, with a total of 16 mentions—more than twice the average mentions across all three media platforms. (Click on the plot for a larger version) 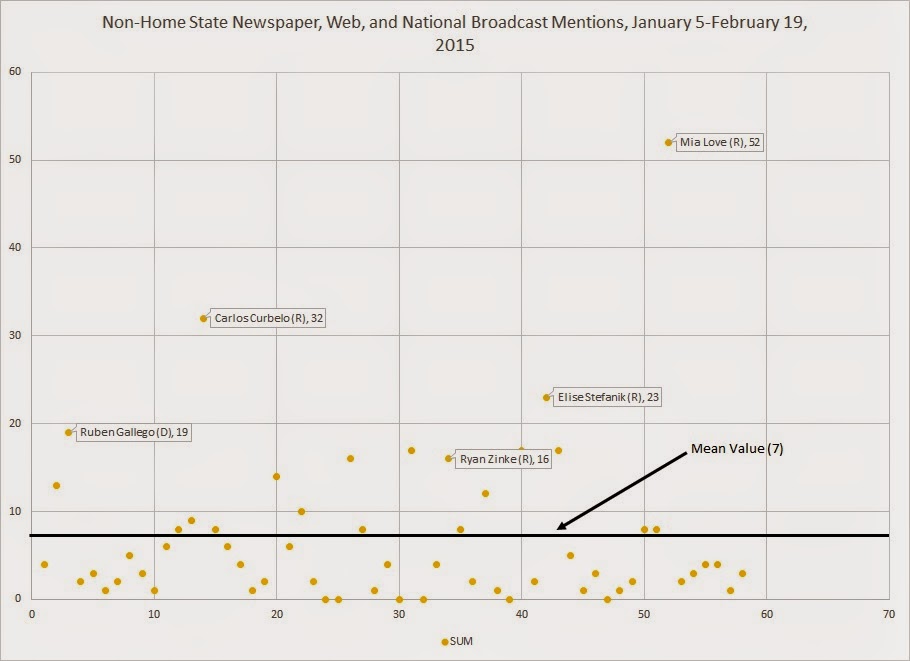 (Quick side note: As other scholarship has shown, members of the majority party seem to get a media attention bonus and that’s the case here—Republican freshman in the House have slightly higher mentions on the web, in newspapers, and especially on television than Democratic freshmen).

Developing strong national defense credentials from which to build a constituency beyond Montana helps Zinke both in terms of reelection to the House and burnishes his credentials in a possible challenge to Jon Tester in 2018. How?

First, national media attention is often seen as desirable by constituents. In one study of national media exposure of U.S. Senators, Barbara Sinclair (1990) found that the number of mentions in The New York Times is associated with higher job approval ratings and feeling thermometer scores from individual constituents. Second, national media attention can also lead to additional power within the hall of Congress itself. Sinclair also writes that “within the Washington political community, national media exposure serves as an indicators that the senator is a player of consequence and, by showing she or he can command an audience, it increases the senator’s clout” (489). Zinke benefits by seeking out and successfully obtaining national media coverage on the campaign trail and in Washington.

But, thinking long term, developing a national media attention brings an added bonus beyond the obvious exposure to a network of national Republicans critical to raising the substantial sums necessary to fund a competitive Senate bid against an incumbent. It helps craft the perception of an activist representational style that constituents tend to expect from U.S. Senators more so than from individual members of Congress.

I present two pieces of evidence in support. The first is from Fenno’s book on North Dakota Senator Mark Andrews, When Incumbency Fails (1992). In that book, Senator Andrews—elected to his first term in 1980—is concerned about the prospect of facing a strong challenge from the state’s Democratic Congressman, Byron Dorgan. Dorgan, unlike Andrews, received considerable positive publicity around the North Dakota and was constantly holding forums with constituents. Andrews, on the hand, came home less often and spent much of his time mired in policy detail behind the scenes—while garnishing negative media attention due to a malpractice lawsuit he and his wife had launched against the state’s medical establishment in Fargo. Fenno argues that Andrews was trapped by the constituent service, small ball legislative politics style he developed as a member of the House Appropriations Committee—a style which seemed too little for the expectations North Dakotans had of their U.S. Senator.

The second is my own book, Battle for the Big Sky. In that book, I did three focus groups with voters in Gallatin County. One of the questions I asked was whether they saw senators and members of Congress playing different roles. On the whole, they agreed that the two positions were qualitatively different. Here’s what Nicholas, a 60 year old retired policeman said on the subject:

“I tend,” said Nicholas, to “see a senator as having the potential to be in the role as a statesperson much more than a representative.”62 Senators could “get something done” because the House members are “one per­son in a sea.” Not only would the Senate get more done but it would be more careful, “more considerate. [They] will more thoroughly look at something, be more educated on the topic” (153-154).

In this vein, Zinke looks—in cultivating his representational style and national media attention—like he’s positioning himself for a run at the U.S. Senate. Add to this the fact that he has been openly critical of Senator Tester on more than one occasion (here and here) since taking office, and I very much suspect that he will try to do what Denny Rehberg could not: Unseat Senator Tester. 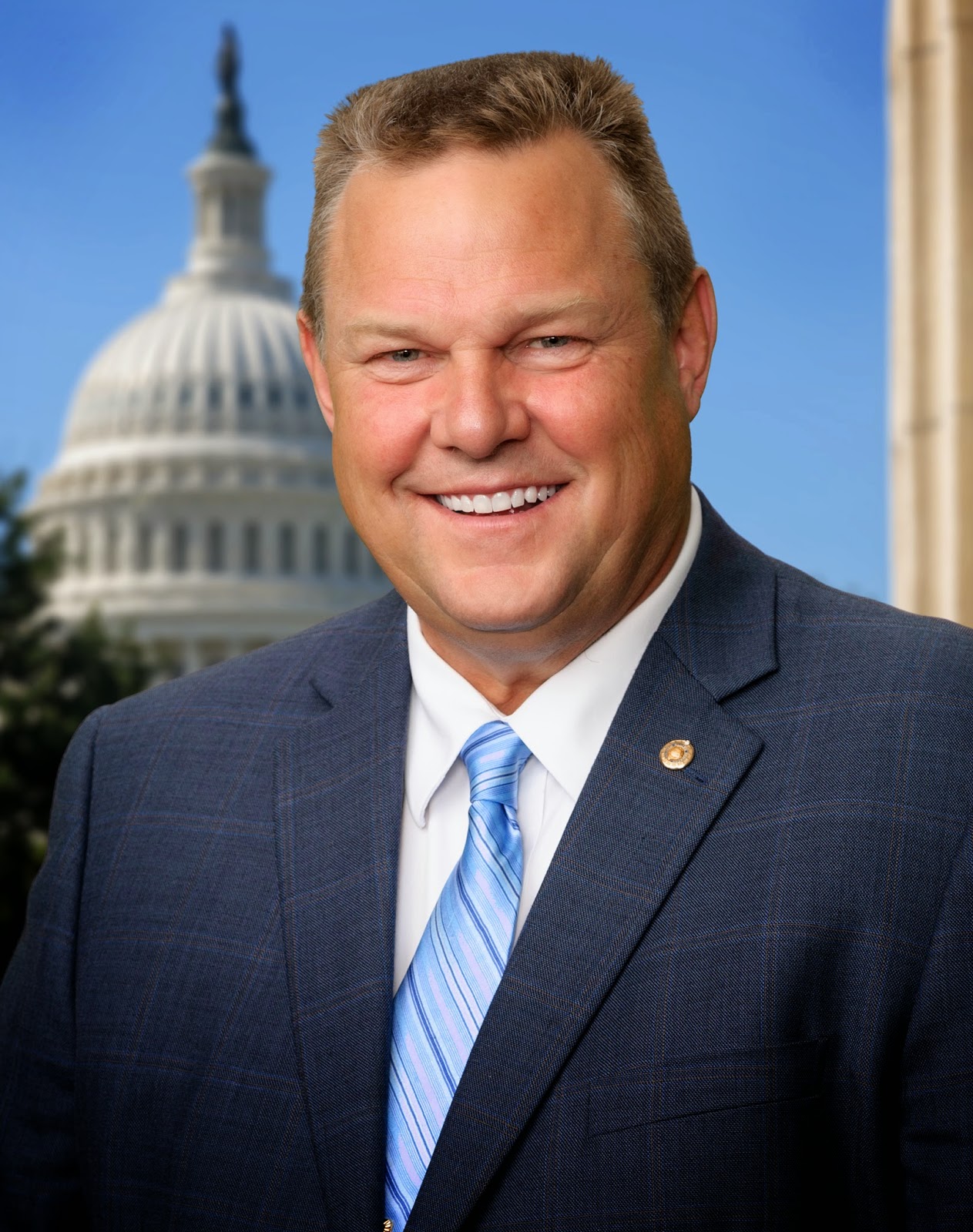 I asked Zinke about this on KBZK this morning. Watch the interview here.

He pooh-poohed the idea, saying that as a member of the "loyal opposition" it was his job to occasionally criticize the other side and that there's nothing amiss in his relationship with Montana's senior senator.

Will he run and, if he runs, will he succeed? I don’t know. I do know, however, that I will be paying careful attention in the months and years ahead for hints and clues as to the Congressman’s true intentions.