A Father's Day Reflection on the Politics of Fear

I have been watching politics unfold for a long time—first as a young idealist hopeful to make the world a better place, later as a student of history interested in understanding the stories of our past, and now as a scholar and analyst helping others to understand the process and its intricacies. But today I write as a father concerned for the future of our political discourse. I’m specifically concerned when I see certain American politicians turn to fearmongering as a way to manipulate the electorate.

Politics has never been for the faint of heart, and very often, civil discourse can get drowned out by those who choose to be nastier than perhaps is necessary or over-simplistic in their rhetoric. And yet, this year—this time—is different. The tone is nastier, more simplistic, and more willing to disregard basic facts than at any time I have seen. It is a politics based upon raw emotion, rather than dispassionate analysis. 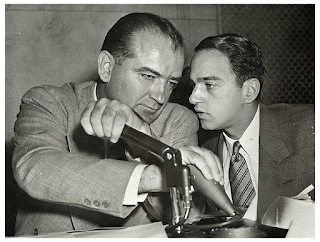 During this political season, I have seen candidates both nationally and here in Montana resort to the divisive language of “us” versus “them,” pretending that they are leaders for “telling it like it is.” These candidates purport to say what regular politicians refuse to voice, and because of that, they argue, we should lend them our support. They are not corruptible, they claim, because they are “one of us” and not “one of them.” They come from outside the contemptible, “broken” political system. They can make America, and Montana, great again because only they have the will to do the tough things the venal politicians in the pocket of special interests refuse to stomach.

These candidates aren’t tough and principled. They are master manipulators asking us to give in to our basest fears. They are unscrupulous charlatans selling us bill of goods.

That’s not leadership. It calls to mind the Red Panic following World War I, or the McCarthyism of the 1950s. Have we lost all decency?

Leaders don’t play on people’s fears. They acknowledge our fears, but inspire us to overcome them. They ask us to move beyond fear and bind us together. They do not push us apart. Leaders, like all of us, are not perfect. They make mistakes. But they fundamentally strive to bring out the best in us as a people, together.

Make no mistake: Political disputes are healthy and good in a republic. We should disagree and do so vigorously. The problem is when that discourse becomes poisoned by a desire to win a political argument at all costs. This mentality encourages doubling down on fear to marshal our darkest doubts against our perceived enemies. It fosters and deepens divisions between us. It is especially dangerous when that fear encourages a majority “us” versus a minority “them”—stoked by too cute by half political framing that skews facts to make a convenient argument.

Or we can choose leaders.

May Americans be inspired to act together this election season “by the better angels of our nature” rather than give into our fear. If we choose to surrender to the “nameless, unreasoning, unjustified terror which paralyzes needed efforts to convert retreat into advance,” then not only is our republic imperiled, but we really have lost our collective national soul.

May we choose wisely.
Posted by David Parker at 7:23 AM No comments:

Why Did Terry Nelson's performance last night made me curious?

On Election Night, both Mike Dennison and I were struck by the vote totals obtained by Terry Nelson, who was running for the Republican nomination for Governor, and Eric Mills, who was running for the nonpartisan Supreme Court. Nelson obtained 24 percent of the vote, and Mills received 20 percent of the vote. Neither ran a campaign of any note, nor did they spend any money. Nelson had raised $1,300 but spent none of it. Mills had $300. Why did they do so well without spending any money? It was curious.

I said as much on air, and sent out a tweet about the Republican primary vote totals earlier today. Former standout student Kendall Cotton suggested it wasn't odd--about 25 percent of primary voters go to the second candidate since 1996. He suggested it was par for the course--there's not much to see here. Move along.

Then why did Governor Bullock manage to get 92 percent of the vote and his opponent only 8 percent? I actually expected there would be more of a Democratic protest vote given that he is on his third Lt. Governor and the persistent attacks in paid media over the Governor's use of his plane. So it seemed odder still that Greg Gianforte, who I presumed had pretty much universal Republican support, would have done better than 75 percent. Especially given the fact that his opponent spent nothing.

Kendall's explanation sounded interesting. But then I looked at campaign finance expenditures from Follow The Money. Take a peak:

Only Steele fits the pattern of almost no money spent and a vote share north of 10 or 15 percent. Otherwise, all the candidates spent some money--and many had some name recognition from their involvement in politics.

2. Some Republicans are not satisfied with Greg Gianforte as their major party nominee.

3. Something else is going on. Perhaps Democrats are crossing over (but really? With the Sanders-Clinton race)?

Does this mean Greg Gianforte will have trouble winning in the fall? It depends on whether 1, 2, or 3 are operative in this instance. He might go on to victory against Steve Bullock with a unified Republican Party. Or, he might have some lingering trouble with his base--a la Congressman Rehberg in 2012, when candidate Teske (spending about $20,000) received a similar share of the vote. And the Congressman did have some trouble with the base--as some Republicans (as detailed in Battle for the Big Sky) abandoned him for Libertarian Dan Cox and others for incumbent Democrat Jon Tester.

I lead you to draw your own conclusions.

Posted by David Parker at 4:03 PM No comments: