Last night I got a "marketing poll" that asked a bunch of questions about the upcoming legislative session.

And they asked about the 2014 Senate race, wondering if I would be voting for Max Baucus or....Steve Daines.

Daines clearly has the desire to be a senator. Recall that he announced right after the 2010 elections he was a candidate for the Republican nomination in 2012. And--then he jumped to the House when Rehberg announced he was running for the Senate.

Will Daines run against Baucus? In some ways, he's the most obvious choice for the GOP. But in other ways, it is a risky bet. Daines has a lot to learn about governing, and he won't have time to do that if he has to throw together a Senate campaign. He'll have a voting record that--while short--will still allow Baucus to go after him in a way that Gillan couldn't during this election. Daines can raise a lot of money--but if you think the $10 million plus raised by Tester was a lot, watch out. Baucus, as chairman of the Senate Finance Committee, can command incredible resources. His war chest will be enormous, and I'll bet we will start seeing ads soon.

Daines' best bet would be to lay low, work hard, and wait for an open seat. Baucus is not young, and if he is reelected, this might be his last term.
Posted by David Parker at 9:17 AM No comments:

Voter Fraud in Montana's Senate race? Not so much.


In a recent article published in Explore Big Sky, Gallatin County Vice Chair Tammy Hall made the claim that Tester may have won because of vote fraud. Here’s the part of the article that's relevant:

"Tammy Hall, first vice president for Gallatin County Republican Women, felt the local Republican effort to get out the vote was strong, but said voter fraud in the county was a factor in the outcomes.
“When you’ve got 8,000 people registering to vote on the same day, you’ve lost control,” said Hall, also one of 22 delegates representing Montana at the Republican National Convention in August."

As a political scientist, there’s nothing more annoying than someone who lobs into the body politic claims of voter fraud without a shred of empirical evidence with which to back the claim. Trust is vital in republican government, and without it, our elected officials cannot hope to government. Part of the reason Congress cannot function is the historically low-levels of trust voters have in the institution. Claiming voter fraud when your candidate or party doesn’t win—instead of engaging in a profound retrospection based upon real data—does not help matters. And it certainly doesn’t help your party or candidate plan for the next election if you just put your head in the sand and scream that the other side cheated.

Voter fraud is serious business, but it can be detected using some rather simple statistical tests. Walter Mebane, a political methodologist at the University of Michigan, has written extensively on the matter. Go to his website and see his research. In a chapter in the book Election Fraud (edited by Mike Alvarez, Thad Hall, and Susan Hyde), Mebane proposes the use of a simple statistical test, called the Second Digit Benford’s Law Test for Vote Counts, to detect the likelihood of fraud. Simply put, the digits in a group of numbers are likely to have a particular distribution. Mebane explains:

“Benford’s Law states that in a list of statistical data, such as vote tallies from different precincts, the digits of the numbers that make up those data points follow a specific distribution. In each significant digit position, smaller numerals appear more often than larger numerals. In a set of data that follow Benford’s Law, the first significant digit is the number 1 roughly 30 percent of the time. There is what I call a second-digit Benford’s Law (2BL) distribution when the first digits have no particular pattern but the second digits of the data points do follow the pattern given by Benford’s Law. In this case the second significant digit is 0 (zero) about 12 percent of the time” (Mebane 2008).

Very simply put, if we see variation from the Benford’s law in the distribution of the second digit in precinct level vote returns, we have possible evidence of voter fraud. It is not proof of fraud, but it raises the possibility that monkey business may be at work.

Because I’m not a political methodologist and not as smart as Mebane, I searched the web for a routine that would allow me to examine precinct level data in a statistical software package political scientists, economists, and sociologists use called Stata. I found such a routine called Digdis. I installed the routine, downloaded precinct vote totals for the Senate race from the Montana Secretary of State’s website, and ran a quick analysis on the second significant figure of the precinct totals. Here’s a screen capture of the Stata output: 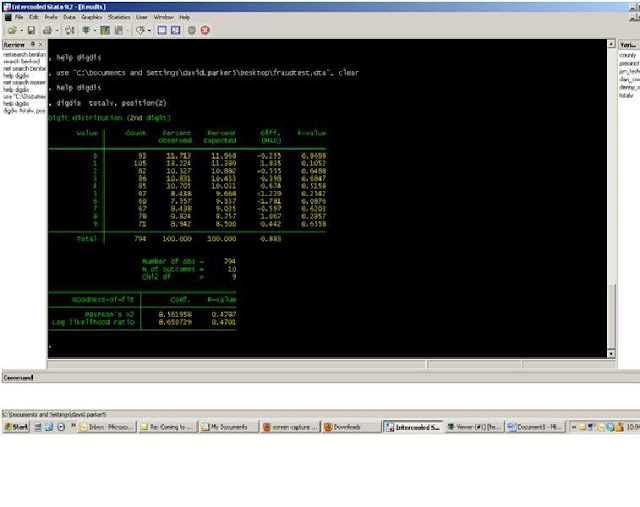 In other words, across the 794 voting precincts, the vote totals reported in the Senate race show NO STATISTICALLY DISCERNIBLE EVIDENCE OF VOTE FRAUD.

Before screaming about fraud, it might make some sense to learn a little about the likelihood of it and build a solid empirical case based upon quantitative evidence to demonstrate some proof of those claims. To paraphrase Dan Rather, voter fraud in the Senate race? “That dog just don’t hunt”.
Posted by David Parker at 10:17 PM 3 comments: 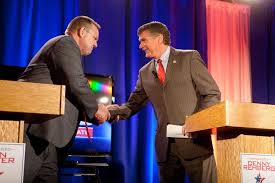 My readers know that I've spent the past 22 months following the Tester-Rehberg race here in Montana very closely. As things began to heat up and more of my time became taken up by the race, it became clear to me that blogging during the campaign--as much as I wanted to--became too much to undertake both personally and professionally. I felt that what I had to say could wait until the book and many of my observations (profound or not will be for you to judge) about that incredible experience can be found there. I will likely try out some of my thinking about the race as I write in the upcoming months here, but there's so much else to write and talk about!

Now that Senator Tester has been reelected, the other Senate race has begun: Max Baucus' pursuit of a seventh term in office. It is clear that as of November 2012, he has some work to do. PPP conducted its last poll in the Tester-Rehberg race on November 4th.

Here's what Jon Tester's job approval rating was in that poll:

Tester's job approval rating in November of 2010 in PPP's poll was:

PPP asked voters about Max Baucus in both those polls. Here's what they thought:

Jon Tester was right side up by ten points in his approval ratings two years prior to his reelection in a brutally competitive race--and he managed to stay right side up in the final days despite an onslaught of negativity over 16 months. Max Baucus is already underwater--and while his job approval numbers have improved over the past two years, it is absolutely clear he's got a tough road ahead. The $64,000 question is whether Republicans will field a strong candidate against him. Stay tuned. Montana politics is never dull.

Posted by David Parker at 11:59 AM No comments: