Senator Baucus: Not popular in the beltway 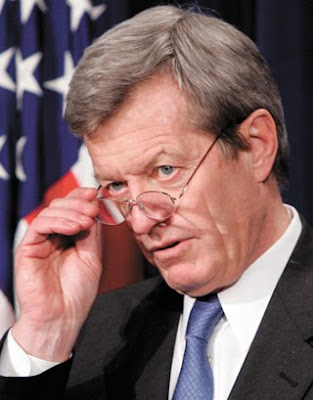 Senator Baucus' role in the healthcare debate did not make him particularly popular in Montana. Nor did the negative press he received about recommending his girlfriend for a position as U.S. Attorney bode well. And now, a recent poll shows his job approval ratings in Montana at around 38% (the poll was done by Public Policy Polling).

Granted, Senator Baucus won reelection overwhelmingly in 2008 (against the "formidable" Bob Kelleher). And he is the Chairman of the Senate Finance Committee, one of the most important and powerful chairmanships in Washington. One wonders, however, what shape the Senator will be in should he chose to run for reelection in 2014. A lot can happen between now and then, but all of this suggests he may face a substantial challenge in the general election--perhaps from Congressman Rehberg. Rehberg, of course, took on Baucus in 1996 and lost in a tough race. He might be game to try again.

Senator Baucus can repair his reputation and win reelection if:

A) He comes back to Montana frequently and visits with constituents.
B) Parlays his position on Finance to bring tangible benefits for the state to which he can point during the next few years.
C) Emphasizes his, to use Fenno's language, "one of us-ness" with Montanans (although I think Tester and Rehberg are more creditable in this regard).
D) Keeps raising a lot of campaign cash to scare off potential challengers.

But don't forget that the most popular politician in Montana at the moment--Governor Schweitzer--will be out of job come January, 2013. He, too, may be looking for something to do. And the Senate might be a place where he can do it.