The 2012 Senate elections look exceedingly tough for the Democrats. Maintaining their majority will be difficult largely because they are "overexposed": Democrats need to defend a total of 23 seats--six of them open because of retirements. Many of those seats are held by freshmen elected in 2006, and many are in states that are either swing or decidedly red in their political persuasions. Republicans, conversely, must hold 10 seats--and most of those seats are in fairly friendly territory. 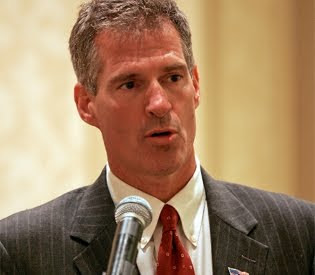 Enter Scott Brown, he who unexpectedly defied the predictions of pundits and captured the Massachusetts Senate seat held for decades by liberal lion Ted Kennedy. If there's a seat Democrats need to pick up--and should--it's this one.

There are lots of things Democrats have going for them. Brown's victory came under unusual circumstances: it was in a special election where voter demographics tend to work in the favor of Republicans, the Democratic nominee--Martha Coakley--was particularly inept as a candidate (she refered to Red Sox pitcher and 2004 World Series hero as "another Yankee fan" and didn't seem interested in doing the spadework of retail politics), and conservative groups were able to concentrate immense amount of resources on this race. Add to this the fact that Massachusetts is--well--MASSACHUSETTS. It is one of the--if not the--bluest state in the country. Obama carried the state by 25 points (making it the sixth best state for Obama), all ten members of the House of Representative representing Massachusetts are Democrats, the Governor is a Democrat, and there are only 32 Republican state legislators in a legislature consisting of 200 representatives and senators total. Add to THAT the fact 2012 is a presidential election year, which should boost voter turnout among Democrats. Both macro- and micro-level trends seem to point to an overwhelming Democratic advantage. 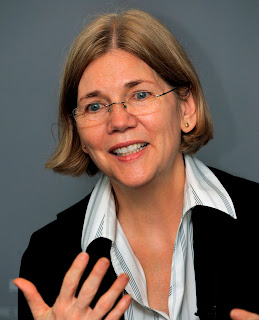 Enter Elizabeth Warren, former Harvard law professor, President Obama's appointee to create a Consumer Protection Bureau, and now candidate for the U.S. Senate seat held by Republican Scott Brown. Several of my Facebook friends excitedly point to a recent poll taken less than a week after Warren announced her decision to run which shows her taking a narrow lead over Brown (see here). Liberals are thrilled--she's very popular among the base and she can raise loads of cash, according to another friend of mine. Scott Brown will be consigned to the dustbin of history, right?

Not so fast, folks. I am not convinced that Elizabeth Warren is all that and a bag of chips as a Senate candidate. To be blunt, she's an amateur--she's never held elected office, knows nothing about retail politics, and--despite her "super-star credentials"--is not what I would call a quality candidate as political scientists define the term. She's not even what I would call an ambitious amateur. She doesn't have widespread name recognition, she doesn't have (as far as I know) a huge source of personal wealth to draw upon, and she's never even run for office before. These are exactly the types of candidates that are prone to make mistakes and underwhelm the electorate once they are placed under the harsh glare of the media spotlight.

But what about candidates like Ron Johnson, who came out of nowhere to beat incumbent Senator Russ Feingold? Lightening can strike--but it does so infrequently. Feingold had never really built a deep and enduring connections to voters in Wisconsin and was highly polarizing due to his iconoclast ways. Brown has some assets, too, that are worth noting:

1. His job approval ratings are tepid, but Brown has strong favorability ratings (above 50 percent according to the PPP poll referenced above). If Brown can focus on his personal characteristics and get folks to either forget or downplay his partisan affiliation, this bodes well for him.

2. He can argue that he'll be in the majority party given the Republicans have a fair shot at retaking the majority, and Massachusetts will benefit from having a Republican senator in that majority representing them.

3. While Scott Brown is certainly to the right of the Democratic-leaning electorate in Massachusetts (see this plot of member ideology relative to state ideology at Voteview), he's certainly one--if not THE--most liberal Republican in the Senate. At least, work done by Professor Royce Carroll at Rice University using current voting records demonstrates this is the case (see this plot of Scott Brown relative to other Republicans in the Senate here).

4. If Scott Brown is so vulnerable, one might wonder why so many other experienced and capable Democratic politicians with actual records took a pass on the Brown race. This includes the entire congressional delegation with such capable individuals like Barney Frank, Stephen Lynch, John Tierney, Ed Markey, and Michael Capuano. And don't forget Congresswoman Nicki Tsongas, who has the valuable asset of a well-known and respected last name in addition to her own work in Congress since she was elected in 2006.

Scott Brown is an experienced politician who's run for office before, understands how to put together a successful campaign, and has defied the odds before. He should not be written off. I am not convinced that Elizabeth Warren is the formidable candidate some claim she is. Her "surge" in the polls is likely attributed to the fact that she has a "D" after her name and simply reflect the partisan advantage any Democratic candidate in a state as blue as Massachusetts would enjoy. Once the campaign begins in earnest, we'll see whether she's truly the top-tier recruit national Democrats would have us believe.

Everyone, that is, except Scott Brown. ;-)