I’m always skeptical when I get the e-mails and press releases from candidates attacking the records of their opponents. They are often prone to hyperbole and histrionics. In 2012, Jon Tester was called “liberal” and advertisements suggested he was an Obama clone for voting with the president “95 percent of the time”.  I recently received an e-mail from the Montana Democratic Party that says the following about “Shut Down Steve”: “Congressman Daines’ Tea Party agenda isn’t just hurting Montana families, it’s hurting Montana’s great outdoors for future generations”. An earlier e-mail claims that “Congressman Daines’ decision to side with extremists” hurts Montana.

Steve Daines’ own campaign has intimated that Walsh is in the pocket of out-state liberal interest who will “spend millions promoting Walsh.” The email continues: “But the fact remains that we're going to have to compete with millions of dollars from the Democrat elite, special interests, Hollywood, and New York liberals, like Chuck Schumer.”

How does one make sense of all of these allegations? Is Representative Steve Daines “too extreme” or “too conservative” for Montana? How can we objectively assess the voting records of members of Congress especially when the campaigns have little interest in an objective portrayal?

One way to evaluate the voting records of members of Congress is to examine their NOMINATE scores. NOMINATE is a measure of ideology developed by political scientists Keith Poole and Howard Rosenthal. This measure uses the roll call votes of members and plots every member along a left-right dimension ranging roughly between -1 and 1—with -1 the extreme liberal end of the scale, and 1 the extreme conservative end. This measure allows us to not only evaluate how liberal or conservative a member is relative to other members, it also allows us to measure how the ideologies of members of Congress has changed over time.

Recently, Poole and Rosenthal released their NOMINATE estimates for the first year of the 113thCongress. We can finally, with these scores, put Daines’ voting record into comparative perspective. In the first figure below, I plot Daines’ NOMINATE scores relative to every other member elected to serve in the House of Representatives for Montana in the post-war era (from the 80th Congress through the first year of the 113th). Democrats serving in the House are below the X-Axis, and Republicans are above the X-Axis. 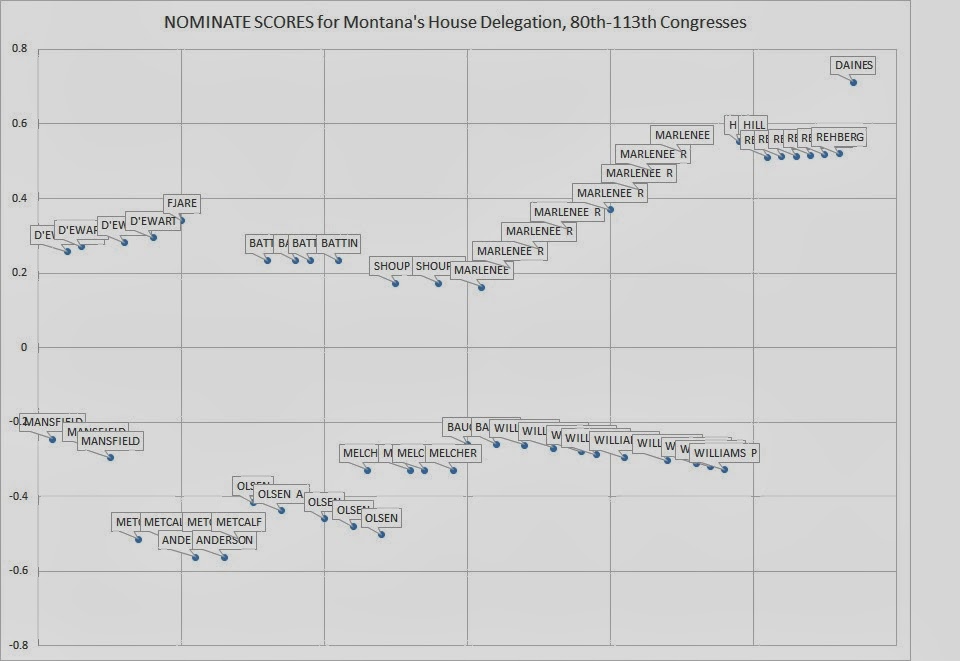 The first thing that leaps out from these data is that, unequivocally, Daines has compiled the most conservative voting record of any Montanan elected to the House of Representatives. Of that there is little doubt—his NOMINATE score is far more conservative than Rehberg’s (who, by the way, was not particularly extreme ideologically) and further to the right of Congressman Rick Hill.

The second figure aims to put each House member’s ideological into additional comparative perspective. This time, I plotted the mean NOMINATE values for the Democratic and Republican Parties in each Congress. Then, I subtracted the NOMINATE value for each member of Montana’s delegation from that mean. The resulting value represents how far the member is their party’s NOMINATE average relative to the ideological center (which is zero on this scale). A positive value means the member is to the left of the party mean and a negative value to the right of the party mean. 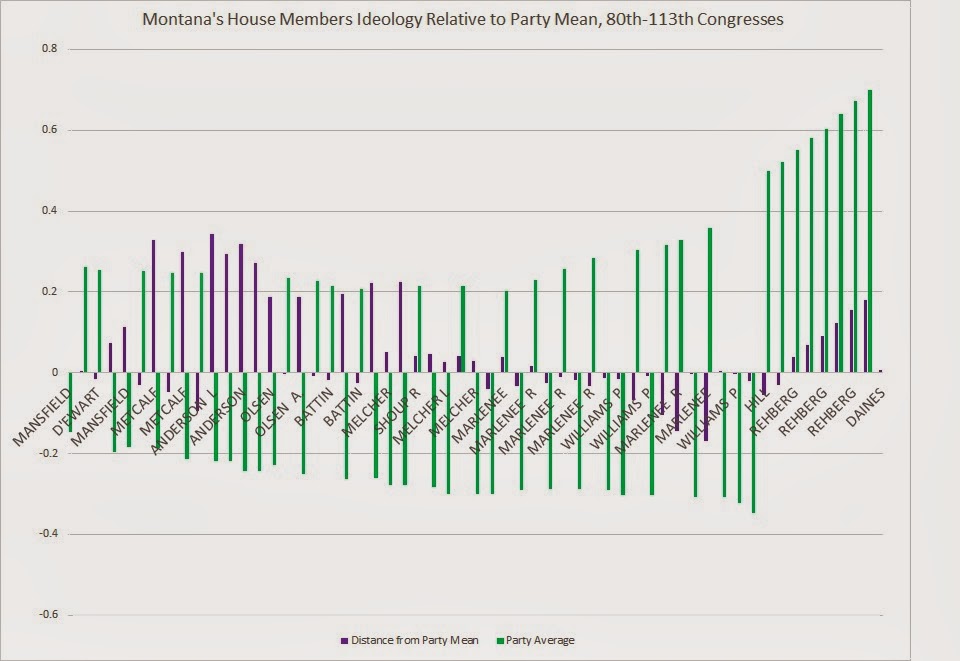 Note how much further the Republican Party has moved to the right compared to the Democratic Party’s move to the left. Second, note that Congressman Daines is pretty close to the Republican mean in the current Congress but—because the Republican mean has moved so far to the right—he is the most conservative individual Montana has ever elected to the House of Representatives even if he represents the center of his party. By comparison, note how centrist Congressman Rehberg appears relative to the rightward shift of the Republican Party during his time in Congress. Perhaps this ideological disparity explains why Rehberg's campaign was so concerned with nailing down his ideological right flank during the 2012 Senate race.

It is also interesting to note that the Democratic Party nationally has not moved as far leftward as the Republican Party has moved rightward—and furthermore, Democrats representing Montana in the House generally speaking have moved to the right of their party ideologically and closer to the ideological center over time (note how much more liberal the Democratic House delegation was in the 1950s and 1960s than the Democratic Party nationally has denoted by the positive purple bars on the left side of the graph). Montana Republicans, generally speaking, have been much further from that center and the distance has only increased over time.

Now, Daines’ record is certainly the most conservative of any House member to serve the state. Is that too extreme? He is not as extreme or conservative as other members of the House. Congressman Daine’s NOMINATE score is to the left of the average member of the House Tea Party Caucus (whose average score is .794). The most right member of the Republican Party is Congressman Jim Sensenbrenner from Wisconsin who has a NOMINATE score of 1.257. The most liberal Republican is Congressman Walter Jones of North Carolina who has a NOMINATE score of .054. To the immediate left of Congressman Daines is Congressmen Barton and Hall of Texas and Congressman Lankford of Oklahoma. To his immediate right are Congressmen Hunter (CA), Hartzler (MO), and Renacci (OH).

Although Congressman Daines has made some votes to establish moderate credentials, most notably his vote for the Violence Against Women Act, his global voting record as calculated using the NOMINATE algorithm clearly shows he is quite conservative and without a doubt the most conservative Montana has elected to the House of Representatives. A big part of Daines’ conservative record simply reflects how far to the right the Republican Party has moved in the past twenty years.

Is Congressman Steve Daines "too extreme" for Montana?  That will be for the voters to decide.
Posted by David Parker at 9:32 PM

one might appreciate the need to for the GOP to move to the right over the last 20 years as our country with Clinton and Obama swung left. Seems with todays polls the independents may be coming back to their senses as we head into 2014.

How is the NOMINATE measure calculated, specifically?

The math is pretty complex (beyond my understanding). Here's the basic gist:

"NOMINATE places ideologically similar legislators (e.g., liberal Senators Barbara Boxer (D-Calif.) and Al Franken (D-Minn.)) closer to each other, and farther from dissimilar legislators (e.g., conservative Senator Tom Coburn (R-Okla.)) based on the degree of agreement between their roll call voting records. At the heart of the NOMINATE procedures (and other multidimensional scaling methods, such as Poole's Optimal Classification method[5]) are algorithms they utilize to arrange individuals and choices in low dimensional (usually two-dimensional) space. Thus, NOMINATE scores provide "maps" of legislatures.[6]"--From the Wiki entry on NOMINATE SCALING

What Poole does is use the body of roll calls to calculate the scores. This is different from what individual interest groups do, which is to select a portion of roll calls and develop a score.

For more detailed data, I invite you to go to Keith Poole's website, voteview.com.

Ha, Jon! I find it funny we both go to the Wik. Don't tell my students!

I see how you do things at MSU...
:)
I'm UM poli-sci alumni, but I never had any courses that looked at mapping votes like this. It may be accurate in showing changes in caucuses over time, but like Dan alluded to above, the evaluation becomes more subjective when trying to draw correlations to changes in Executive powers, changes in technology that shift public perception and involvement (democracy), corporate influence in elections etc.

I want to know exactly what were the issues for which Daines is evaluated. For example, I know he voted "not" on Hurricane Sandy support.
Thank you.
Dottie Susag, Fairfield, MT