This evening, Congressman Paul Ryan announced his willingness to serve as Speaker if House Republicans agree to unite behind him. As Congressman Ryan Zinke has already indicated he would support Ryan if he were to run for the Speakership, it would appear that Zinke's Speakership bid (such as it was) appears to be over. Unless, of course, the House Freedom Caucus still thinks Congressman Ryan is too liberal.

The Congressman's spokesperson, Heather Swift, took to Twitter to dispute my claim. She pointed me to GovTrack's measure of ideology. Swift pointed out that it was important to not only consider votes taken on the House floor (which is the basis of the NOMINATE score), but legislation that is sponsored and co-sponsored but which has not (and very well will not) receive space on the House agenda, therefore, will not receive a formal roll call vote.

Swift is not entirely wrong on this point. In fact, as I argue in Battle for the Big Sky, bill sponsorship is a better measure of true preferences because of the substantial resources required to submit and advocate for a piece of legislation. I don't entirely buy the argument that co-sponsorships is a good indicator of real ideological preferences, however, because a co-sponsorship could represent a member's true, revealed preferences or it might simply represent "cheap" talk--an attempt to look more left or right than one actually is.

In any case, I was happy to investigate the data that Swift pointed me to in order to see if I had missed something or had misrepresented the Congressman ideologically. I went to GovTrack, read their account of their ideology measure based upon bill sponsorships and co-sponsorships, and downloaded it. The folks at GovTrack note that their measure of ideology, while based on different information than Keith Poole and Howard Rosenthal's NOMINATE scores, correlated well with those scores. You can read about the methodology here and grab the scores yourself.

Next I simply ran a quick scatterplot of the NOMINATE and ideology scores for each member of the 114th Congress. Again, visually the data show that the two appear to measure the same thing. The upper right corner represents the Republicans while the lower left represents the Democrats. Here's that plot with the X-axis the Poole-Rosenthal NOMINATE and the Y-axis the GovTrack Ideology measure. 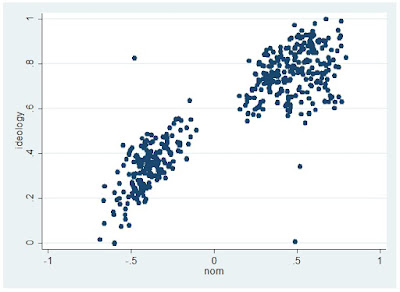 The next two graphs separate out the seventeen Republican speaker candidates mentioned in the news. The first chart replicates the scatterplot above, while the second simply graphs the speaker candidates from left to right using the GovTrack ideology score alone. In both charts, I add the mean value of the House Republican caucus, the mean value of the House Freedom Caucus, and the value for one standard deviation above and below the mean. 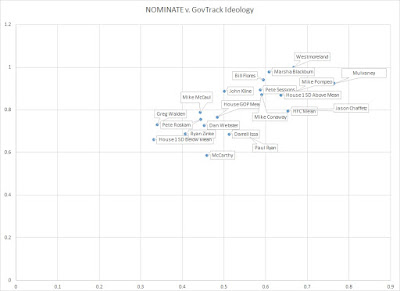 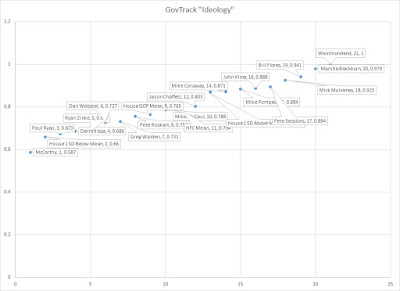 What do I find?

Essentially the same story I found when looking at the NOMINATE data alone. Congressman Zinke is now the fourth most liberal among those mentioned as Speaker candidates when looking at the GovTrack ideology measure. NOMINATE had him at second most liberal. He's still to the left of the Republican House Caucus mean. And he's still considerably to the left of the House Freedom Caucus. Using these data, Paul Ryan, Ryan Zinke, and Darrell Issa are all essentially the same ideologically--and all are to the left of the House Republican Caucus.

The take away point? Congressman Zinke, whether using roll call votes or co-sponsorship patterns, is on the left ideologically among his House Republican colleagues. In fact, there are 62 other members who are closer--using the GovTrack ideology measure--to the House Republican mean.

And, again, if Congressman Ryan is too liberal to be Speaker according to the House Freedom Caucus, than isn't Congressman Zinke?  #data