From Politico:
Darrell Issa plans hundreds of hearings - Jake Sherman and Richard E. Cohen - POLITICO.com:
"California Rep. Darrell Issa is already eyeing a massive expansion of oversight for next year, including hundreds of hearings; creating new subcommittees; and launching fresh investigations into the bank bailout, the stimulus and, potentially, health care reform.
Issa told POLITICO in an interview that he wants each of his seven subcommittees to hold “one or two hearings each week.”"
David Mayhew wrote a book called Divided We Govern in 1991. In that book, he argues that Divided Government does not lead to more high profile investigations of the executive branch. My co-author Matt Dull and I took on this assertation in an article ("Divided We Quarrel") published last year in Legislative Studies Quarterly, where we find that divided government is significantly associated with an increase in the number and intensity of investigations of executive branch malfeasance conducted by the House of Representatives. Although our analysis ends in 2004, data we have collected for the 110th Congress show a spike in investigations with the return of divided government.
Here is Figure 2 from that article: 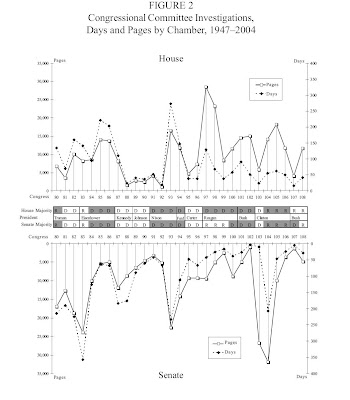 An analysis of investigations with the committee as the unit of analysis shows a similar trend: divided government is associate with more and longer investigations of the executive branch.

Is this a good thing? Not necessarily. As Matt and I conclude in a related article in progress:

"Our findings, however, do not suggest that a 'mended' Congress performing vigorous oversight is necessarily a positive development. Cartel committees in divided government pursue investigations aggressively and intensely, yes, but such activity may only serve to increase partisan rancor in Washington given such investigations are potentially driven by partisan purposes. More investigation need not imply better government. Indeed, given all the consternation expressed by some politicians and the public at large about pork barrel spending, our findings on investigation should give pause. Yes, Congress may be more willing to investigate the executive branch under divided government; however, it will not disturb the logrolling arrangements so important to the re-election prospects of individual members."

Which is why, of course, oversight was so lax when it concerned MMS.

The punch line: Divided government matters. It makes it harder to pass legislation, and increases the propensity of Congress to oversee the executive branch.
Posted by David Parker at 11:12 AM

But as regards your punch line, I'll agree with just a couple of minor edits: Divided government matters. It makes it harder to pass bad legislation, and increases the propensity of Congress to do their job and oversee the executive branch.

Anyway, just wanted to let you know as a courtesy that I linked and commented on this post in my most recent Carnival of Divided Government a periodic compilation of writing on the subject.