The Montana Senate Race: Who are these guys and what are their records?

Watching this Montana Senate race closely has proved to be immensely interesting, enjoyable, and fascinating. Readers of this blog will note that I have repeatedly stressed the notion of “one of us”—campaigns work hard to show how their candidate is connected to voters and how their opponent is not. This really gets at the heart of representative democracy: voters are more likely to trust decisions made by representatives who look, act, and think like them. To use the language of postmodernism, what voters do not want and fear is the “other”: the representative who is beholden to someone else and who will make decisions not in their best interest.

Part of proving or demonstrating “one of us” is to discuss legislative records: What have you done for me lately and how is it evidence that you are serving the best interests of ? Senator Tester casts himself as an independent voice for an independent-minded state, while calling Congressman Rehberg a yes man for Republican Party bosses. Congressman Rehberg, alternatively, says he’s the true voice of the Montana voter and Senator Tester is merely another vote for President Obama and his agenda. Each side will use a vote or a series of votes to support their position: Senator Tester voted with President Obama X number of times, and Congressman Rehberg is too conservative for Montana because he voted for House Republican proposal X, Y, or Z.

How can the average voter make any sense of these claims? As with all things, it depends on how you look at the records of both candidates. I am going to present three ways of thinking about Senator Tester’s and Congressman Rehberg’s records. I am going to present some additional data that will help you contextualize those records. Using this information, I provide some brief commentary but will largely leave it to Montanans to draw their own conclusions about the claims of both campaigns about their own records and the records of their opponents.

In general, the claims made by the campaigns about themselves and their opponent revolve around three distinct concepts:

Party Unity: How often does the member vote with their party in Congress?

Ideology: How liberal or conservative is the member?

Presidential Support: How often does the member support the president’s legislative agenda?

There are a number of ways these concepts can be empirically measured. Here are some standard measures utilized by political scientists that we’ll examine:

Party Unity: There are many ways to measure party unity, but the most common measure is produced annually by Congressional Quarterly since the late 1950s. CQ defines a party unity vote as a majority of one party opposing the majority of the other party on a given vote. To be specific, if 51% of Republicans vote yea on a motion and 51% of Democrats vote Nay, that vote meets the minimum standard to be included as a party unity vote. A party unity score is the percentage of times a member votes with their party on all party unity votes cast in a given year. The percentage of party unity votes as a percentage of all votes cast in Congress has ebbed and flowed throughout the years—the mid-1970s were a low point, while the last twenty years has seen a rebound in the number of votes clearly dividing the parties. Party unity scores have also increased over the late 20th and early 21st centuries, meaning members of the House and the Senate have become more loyal to their parties and less likely to break partisan ranks. Averages today are typically in the high 80s to low 90s in both chambers, with the House usually exhibiting more party loyalty than the Senate.

Ideology: One way to measure how liberal or conservative a member is to use DW-NOMINATE scores. DW-NOMINATE is a measure of ideology created by Poole and Rosenthal in their seminal work, Congress: A Political-Economic History of Roll Call Voting. Essentially, DW-NOMINATE takes the all the votes cast in Congress over time and develops factors which explain the variation found in those votes. The first dimension score Poole and Rosenthal call ideology, and this measure places members of Congress on a left-right dimension. Positive scores approaching 1 are more conservative, while negative scores approaching -1 are more liberal. It is important to note that both parties have become increasingly polarized after 1975, which means the average Democrat has become more liberal and the average Republican more conservative in both the Senate and the House. The other important thing to note is that both parties have become more ideologically homogenous—meaning moderates have become increasingly rare. More information on NOMINATE and NOMINATE scores can be found at Keith Poole’s website here.

Below, I have created a series of graphs depicting the voting records of the Montana congressional delegation between 2001 and 2011. In each instance, I plot the party unity, ideology, and presidential support scores for Senators Tester, Baucus, Burns, and Congressman Rehberg. I also provide contextual information, namely the average scores for Democrats and Republicans in both chambers. Finally, I wrap up the discussion with some concluding thoughts and by examining key congressional votes to see if that information tells a story that is any different from these more general measures of party unity, ideology, and presidential support. 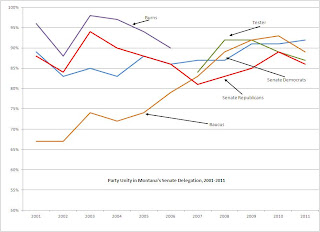 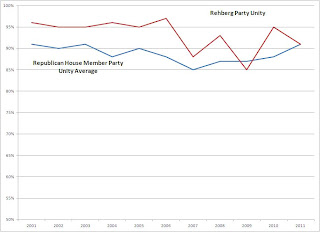 How liberal or conservative is Montana’s Congressional Delegation? NOMINATE scores help sort this out. The first chart plots the first dimension DW-NOMINATE values of Montana’s Senate delegation, the second plots Congressman Rehberg relative to his peers in the House. 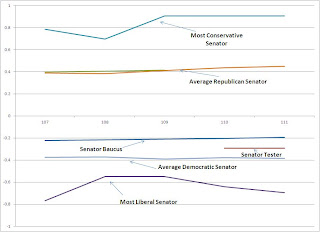 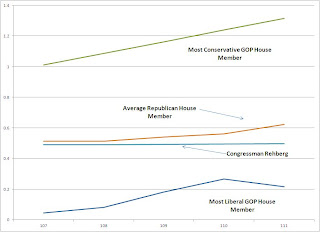 How often did Presidents Bush and Obama receive support from Montana’s Congressional delegation? The final two charts show us. Again, the first chart is the CQ Presidential Support score plotted for Senators Burns, Baucus, and Tester and the second chart is Congressman Rehberg relative to his Republican peers. 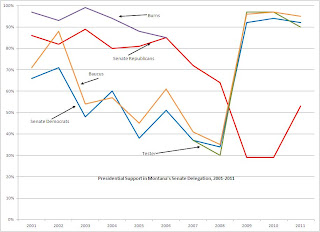 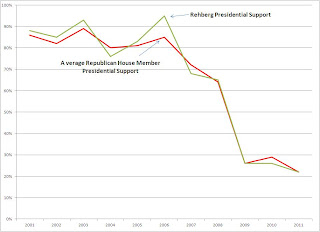 In general, we learn the following from these measures of party unity, ideology, and presidential support:

3. Ideologically, Montana’s Democratic Senate delegation votes to the right of the average Senate Democrat. It is difficult to call either Senator Baucus or Tester a liberal—they are moderate or—perhaps more generously—conservative Democrats. Congressman Rehberg faithfully exists at about his party’s mean in the House—and quite possibly a tad to the left of the mean GOP member in the last Congress. Congressman Rehberg is conservative, but his conservatism is not extreme relative to his peers. He’s no Ron Paul or Randy Neugebauer, both representing Texas and two of the most conservative members of the Republican delegation in the House.

Three different ways to consider the legislative records of Montana’s congressional delegation. Overall, the picture is far more complex and nuanced than we might expect given the campaign rhetoric we hear on Montana’s airwaves, read in our inboxes, and a view on Facebook.

But does this matter? Politics is largely a symbolic enterprise for most voters; candidates understand this and so throw red meat to the masses.

I would like to see you take a look at the symbols each use and try to say something about that.