The True Costs of Denying Public Access: Worse Health Outcomes for the Poor?


Vox had an interesting piece today examining the relationship between income and age expectancy. You can read it here. As one might expect, they report that growing income inequality is related to a growing gap in age expectancy. But there’s another factor seemingly related to how long one lives: Where one lives. Here’s a brief snippet explaining the importance of geography and longevity:

To Chetty's surprise, the strongest pattern in the data was the role geography played: Low-income individuals lived the longest (and had more healthy behaviors) in cities like New York and San Francisco with populations that are, on average, well educated, and high-income.

What leapt out at me, however, was not the connection between urbanity and life expectancy for the poor. Another geographic pattern became apparent as I scanned two charts reporting the life expectancy gap by income in each state: Access to public land. Here are both charts as reported by Vox. The one on the left looks at men; the second, on the right, at women. Click on them to enlarge.

Look at the states clustered at the top: many have substantial public land holdings. Montana is number one for men, and 10th for women. Like a good social scientist, I combined the data in the two charts and added a percentage of total public land ownership variable to the mix. I calculated the longevity gaps between the richest 25 percent and the poorest 25 percent of men and women. Finally, I ran a quick correlation between the gaps and the public land variable. The resulting correlation statistic is simply a measure of how well the two measures move together and in which direction. Here’s a screen shot of the results: 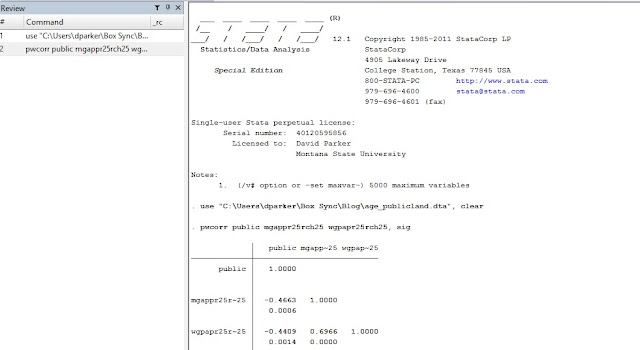 The correlation is negative and statistically significant for men and women, suggesting that the more public land in a state, the lower the longevity gap between the richest and poorest quartiles regardless of gender. Further investigation uncovered that the gap between the poorest 25 percent and the second poorest 25 percent also decreases significantly with greater percentages of public land, but the correlation is less strong (-.30 and -.33 for men and women, respectively, versus the -.47 and -.43 reported above).

It’s hard to make too much of this relationship, as I have not controlled for a whole host of other demographic and behavioral factors that explain health outcomes. Until I’ve done that, it’s hard to see how strong the effect of public land access is on public health outcomes and whether it withstands controlling for these other factors. Correlation is not causation. People who value public land access are very likely different in many respects from those who do not. Certainly, people who move away from a place without much public land in favor of a place with lots of public space are probably going to have different habits and leisure activities than those who stay put. And places with public land are also quite different from places without. Without examining all of these factors, the relationship between life expectancy and public land access is not completely clear.

With those caveats made, an important finding mentioned in the VOX article is the association between poverty and two key factors associated with lower life expectancy: obesity and sedentariness. Clearly, greater access to the great outdoors would help combat both—and this access may be even more important for the poorest among us to increase their life expectancy. Providing and protecting access to public land might be one of the best ways to mitigate one the most dire consequences of rising income inequality.
Posted by David Parker at 1:08 PM